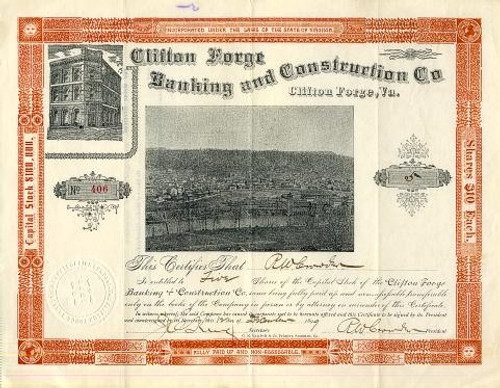 Beautiful certificate from the Clifton Forge Banking and Construction Co issued in 1899. This historic document was printed by C.R.Van Pelt & Company and has an ornate border around it with a photo vignette of the city of Clifton Forge, with a view of the bank. This item has the signatures of the Company's President and Secretary and is over 116 years old. 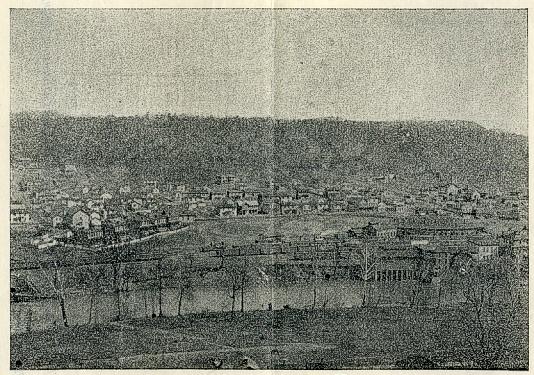 Certificate Vignette
The Town of Clifton Forge, Virginia is a Municipal Corporation and a Political Subdivision of the Commonwealth of Virginia. Although the Town was chartered in 1906, its history dates back to the 1700s. The land that the Town now occupies was originally part of a 1770 land grant to a Robert Gallaspy by Lord Botetourt, the Governor of Virginia. The ownership of the land changed several times, and the Williamson and Smith families became the owners in the 1820s. A settlement developed along both sides of the Jackson River from Slaughter Pen Hollow to Smith Creek. The iron industry in Alleghany County and the completion of a road over North Mountain (now U.S. Route 60) in 1826 began the growth of the settlement. Mr. William Lyle Alexander of Lexington owned a forge in the Rainbow Gorge near Iron Gate, and he named the forge "Clifton" in honor of his father's estate in Lexington; thus, we have the name "Clifton Forge." The Town has a rich railroad heritage with the first passenger train arriving in Clifton Forge in 1857. Clifton Forge grew up with the railroad industry and it became a major maintenance facility for steam locomotives of the Chesapeake & Ohio Railroad (C & O Railroad). The Town was a virtual boomtown during the heyday of the railroad with the C & O employing nearly 2,000 people. With the advent of the diesel engine, in the early 1950s the C & O Railroad located its maintenance diesel shops in West Virginia and many of the jobs were transferred to the new facility. Because of its rich railroad heritage, Clifton Forge is the home of the Chesapeake and Ohio Historical Society, Inc. History from Wikipedia and OldCompanyResearch.com.