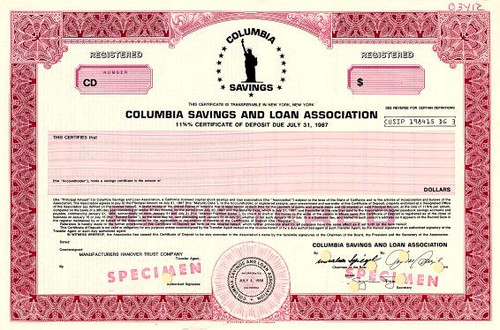 Beautiful engraved specimen certificate from the Columbia Savings and Loan Association printed in 1983. This historic document was printed by Jeffries Banknote Company and has an ornate border around it with a vignette of the Statue of Liberty. This item has the printed signatures of the Company's President and Secretary and is over 24 years old. 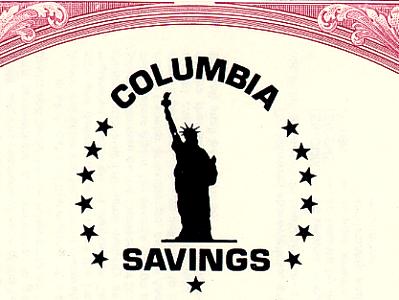 Certificate Vignette
The Columbia Savings and Loan Association, which bought more "junk bonds" than any other savings institution, was taken over by the Government, paying the final price for its risky investment strategy. Columbia, based in Beverly Hills, Calif., had been suffering huge losses as the value of its portfolio plummeted along with that of the entire $200 billion junk bond market. Its takeover by Federal regulators was seen as inevitable.... News Article Date: Feb 4 1991 Feds seek buyer for Columbia S&L assets before the seized thrift deteriorates more. Subject: Savings and loan associations (Mergers, acquisitions and divestments) Company: Columbia Savings and Loan Association (Mergers, acquisitions and divestments) Feds seek buyer for Columbia S&L assets before the seized thrift deteriorates more Columbia Savings & Loan Association's recent seizure by federal regulators began a process of finding a buyer for the assets of the junk-bond laden thrift. The seizure, conducted Jan. 25, surprised no one. The Beverly Hills-based thrift faced massive losses in 1989 and 1990 as it was forced to write down its junk bond investments to market and announced in November that it would likely be seized by regulators. As of Sept. 30, 1990, Columbia had assets of $6.6 billion, making it the sixth largest S&L in Los Angeles County. Analysts already estimate the loss to taxpayers of bailing out depositors at $1 billion to $1.5 billion. Federal regulators face the task of managing the thrift and selling it off before it deteriorates further. "It's Regulators said that immediate efforts will be aimed at preparing the institution for sale to investors. "We're going to make it as efficient as possible," said Kevin Shields, a spokesman for the Resolution Trust Corp. "It has a good branch network in California and we should be able to sell it. The question is when." Shields said that large S&Ls like Columbia have taken from 9 to 18 months to sell. About Specimens Specimen Certificates are actual certificates that have never been issued. They were usually kept by the printers in their permanent archives as their only example of a particular certificate. Sometimes you will see a hand stamp on the certificate that says "Do not remove from file". Specimens were also used to show prospective clients different types of certificate designs that were available. Specimen certificates are usually much scarcer than issued certificates. In fact, many times they are the only way to get a certificate for a particular company because the issued certificates were redeemed and destroyed. In a few instances, Specimen certificates we made for a company but were never used because a different design was chosen by the company. These certificates are normally stamped "Specimen" or they have small holes spelling the word specimen. Most of the time they don't have a serial number, or they have a serial number of 00000. This is an exciting sector of the hobby that grown in popularity over the past several years.