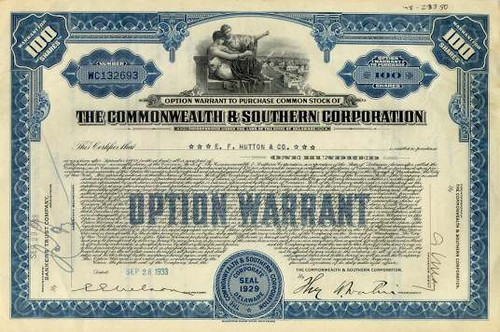 Beautifully engraved certificate from the Commonwealth & Southern Corporation issued in 1934. This historic document was printed by the Hamilton Banknote Company and has an ornate border around it with a vignette of an allegorical man and woman looking over a city. This item has the printed signatures of the company's president and secretary and is over 77 years old. The merger of three large holding companies into the Commonwealth & Southern Corporation in May 1929 created the nation's largest utility holding company. Holding companies such as the Commonwealth & Southern Corporation were umbrella organizations linking together smaller electric companies into large and powerful organizations. Government regulators were alarmed by the ability of large holding companies to use their tremendous (often monopolistic) power to set high electricity rates. This abuse, coupled with some notorious cases of corruption caused many government and business leaders to become alarmed by what the merger created: a single corporation controlling 165 utility companies in 10 states ranging from Michigan to Florida. FDR eventually fored the breakup of this powerful holding company. Wendell Willkie became president of the Commonwealth & Southern Corporation in early 1934. Once he assumed control of the financially weakened company, he immediately instituted a series of successful revenue-boosting plans and this success, combined with his superior speaking skills, lead Willkie to assume the role of chief spokesman for the electric utility industry. That leadership role positioned Willkie to become the most visible critic of FDR's New Deal legislation, which in turn, more than any other factor, enabled Willkie to capture the 1940 GOP nomination. Southern Company's history includes hundreds of success stories and achievements. Some milestones, however stand out as pivotal events in the company's growth. Here* are 10 special "moments that mattered." Founding the Power House. The history of Southern Company can be traced back to the mid-1920s, when Alabama Power, Georgia Power, Gulf Power, and Mississippi Power became an interconnected system under a holding company known as Southeastern Power & Light. The purpose of the integration was to enable each company to provide more reliable service to its operating areas and to supply a source of capital funds to the companies for construction purposes. The integration also allowed the companies to take advantage of the executive and technical expertise of the system's personnel. Consolidation and dissolution. Then, in 1930, Southeastern Power & Light merged into the Commonwealth & Southern Corporation to form a system that included five northern companies and six southern companies. However, in the late 1940s Commonwealth & Southern was dissolved pursuant to the requirements of the Public Utility Holding Company Act of 1935. The dissolution was necessary because the 11 companies of Commonwealth & Southern did not have integrated operations or interconnected lines. An integrated system. As a result, four of the southern companies - Alabama Power, Georgia Power, Gulf Power, and Mississippi Power - were deemed to be an integrated system and thus were allowed to remain under common ownership, this time under a new holding company - Southern Company. The new holding company was incorporated in Delaware on November 9, 1945, and located in Georgia in 1950. The year 1949 saw Southern Company's first full year of operation and the emergence of Southern Company Services as the support organization to provide technical and specialized services, at cost, to the parent company and other member companies of the system. Until 1963, this service company was owned by the four operating companies. At that time, Southern Company purchased all of the service company's common stock and the personnel of the holding company became employees of Southern Company Services. Energy to serve the world. In 1981, Southern Company became the first electric utility holding company in 46 years to diversify its operations by receiving permission from the Securities and Exchange Commission to form a new, unregulated subsidiary. In January 1982, Southern Energy, Inc. officially emerged. The company is a global energy company with operations in 10 countries on four continents. Southern Energy's operations include distribution, generation, integrated utility operations, energy marketing, and "inside the fence" energy projects. In 1985, Southern Company Energy Solutions was formed for the purpose of researching, developing, and investing in new business opportunities related to energy products and services. Savannah Electric became Southern Company's fifth operating company when it was merged into the system in 1988. Another Southern Company subsidiary - Southern Nuclear - began providing services in 1991 to the system's nuclear power plants. In 1996, Southern Communications Services began providing digital wireless communications services - over the 800-megahertz frequency band - to Southern Company's subsidiaries and also began marketing these services to the public within the Southeast. Southern Company has other direct and indirect subsidiaries. Paying dividends for over 50 years Today, Southern Company's service territory in the Southeast encompasses more than 120,000 square miles spanning parts of four states - most of Alabama and Georgia, the panhandle of Florida, and 23 counties in southeastern Mississippi. At year-end 1997, the company provided electricity to some 3.7 million retail customers, which accounted for 85 percent of total energy sales and 90 percent of total revenues from sales of electricity. Electricity furnished to sales for resale customers equaled 15 percent of total energy sales and 10 percent of total revenues from sales of electricity. Currently, some 26,000 miles of transmission lines interconnect the system's 281 generating units in the Southeast, which have a total capacity of 31,161 megawatts. Of this total generating capacity, conventional steam represents 70 percent, nuclear 12 percent, hydro 9 percent, and combustion turbines 9 percent. Southern Company has become one of the largest investor-owned electric utilities in the United States. Also, Southern Company ranks near the top in the electric utility industry in terms of the number of common shares outstanding. At year-end 1997, 693 million shares of common stock were held by over 201,000 stockholders located in all 50 states and several foreign countries. In addition, Southern Company has paid its common stockholders higher or equal per share dividends since 1948, and its stock is one of the 25 most widely held corporate stocks in America. The information above was from the the Southern Company's website. Stock research by OldCompany.com (old stock certificate research service).