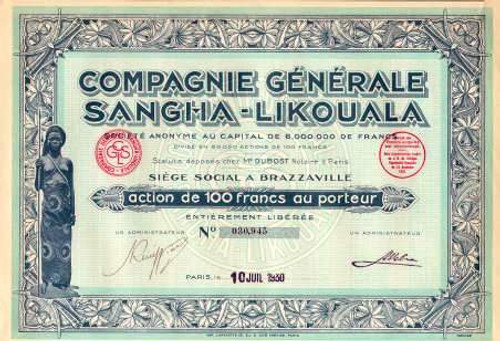 Beautifully engraved Certificate from the famous Compagnie Generale Sangha - Likouala issued in 1930. This historic document has an ornate border around it with elephant tusks in the corners. It also has a picture of a semi nude native woman holding a spear. This item is hand signed and is over 73 years old. Congo River The people and the economy Life of the river peoples Three types of environment are found, either juxtaposed or in succession, along the river and its tributaries: the narrower sections, bordered by firm ground; the wider stretches, dotted with islands and accompanied by backwaters; and the zones where flooding occurs or where there are extensive marshes. Almost all the river peoples engage in fishing. Along the narrow sections, where rapids often occur, fishing is only of interest to a small number of villages. The Enya (Wagenia) of Boyoma Falls and the Manyanga living downstream from Malebo Pool attach fish traps to stakes or to dams built in the rapids themselves. Fishing of a very different nature, notably by poison, is conducted in the marshy areas, where the population is more extensive than might be imagined. Among these peoples are the "water people"--the Ngombe--who inhabit the Itimbiri-Ngiri and the triangle formed by the Congo and the Ubangi. Other fisherfolk of the marshes dwell in the lagoons and the drowned forests of the region where the confluence of the Congo and the Alima, Likouala, and Sangha occurs. Despite unfavourable conditions, all these peoples are also cultivators. They raise dikes, often of monumental size, to plant cassava on the land thus sheltered from flooding. Other crops, such as sweet potatoes, bananas, and yams, are of little importance. Although the Congo basin has the continent's most important timber resources, the timber industry is still largely undeveloped, mainly because the interior is so inaccessible and because the cost of transporting timber to the coast is so high. Few modes of existence have undergone such profound changes as a result of contact with the modern world as has that of the river's fisherfolk. The growth of the towns on the banks of Malebo Pool as well as the taste of urban dwellers for river fish have served to stimulate fishing by relating it to a cash economy. It is not just a question of villagers smoking fish that they sell to passing traders. Increasingly numerous fishing crews sail up the Congo, the Ubangi, and the Kasai, well above their confluences, to fish in the shallows.