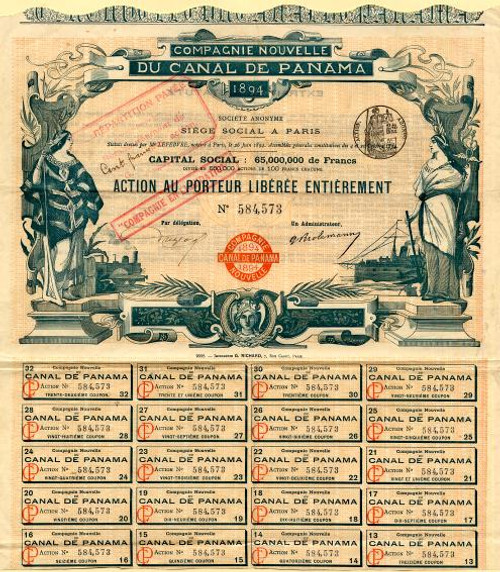 Beautiful RARE certificate from the Compagnie Nouvelle du Canal de Panama issued in 1894. This historic document was printed by the American Banknote Company and has an ornate border around it with a vignettes of a woman of the West with a pick in her right hand and a staff in her left, on the left stands an Oriental woman in a beautiful robe and in bare feet. In her right hand she holds a staff, upon which her index finger rests. Each woman is standing upon a pedestal. Behind the right pedestal appears a portion of a globe showing the Western Hemisphere and behind that there is the forward length of a steamship crossing from east to west. Behind the left pedestal, on which a short wall is built, appears the front portion of a steam engine passing from west to east (no doubt signifying the Panama Rail Road). At the bottom of the certificate, another border connects the two pedestals, in the center of which appears a helmeted female directly facing the observer. On the extreme left side of this panel appears a small black stud, and on the right appears a white stud. The black stud may be a secret mark cleverly incorporated into the design to allow the detection of any forgery of the certificate. In the lower center of the stock certificate, above the helmeted female, appears the logo of the Compagnie Nouvelle du Canal de Panama, with "COMPAGNIE/NOUVELLE" appearing between two concentric circles. The circles are crossed by a bar in which appears "CANAL DE PANAMA." Above and below the bar appears the year that the Compagnie was incorporated: "1894." Along the bottom of the certificate are 20 coupons, in eight rows (four abreast), in which appear, within their respective boxes: "Compagnie Nouvelle/du/ CANAL DE PANAMA." Signatures on the bottom of "Par Delegation" and "Un Administrateur" on each side. The signature by the Delegate was printed, whereas that of the Administrateur was in ink. 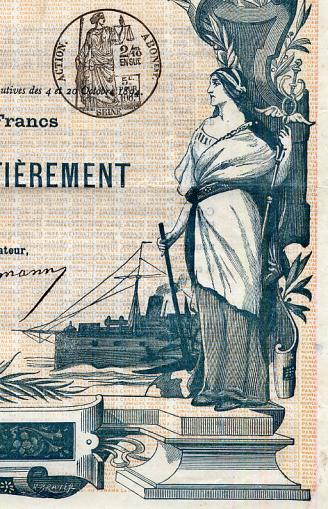 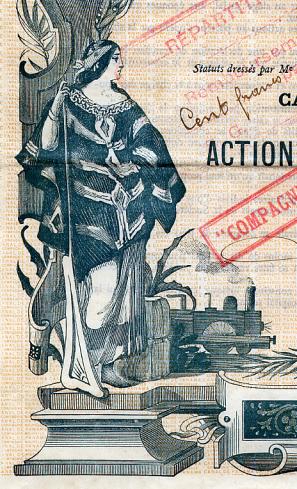 Certificate Vignette
Compagnie Universelle du Canal Interoceanique incorporated under French law, March 3, 1881. Declared bankrupt and dissolved by Tribunal Civil de la Seine, February 4, 1889. Assets and property vested in Compagnie Nouvelle du Canal de Panama, incorporated October 20, 1894. Compagnie Nouvelle purchased by the United States, April 23, 1904, under authority of the Panama Canal (Spooner) Act of 1902. Although it remains one of the great engineering feats of the world, construction of the Panama Canal presented problems from the beginning. In 1879 Ferdinand de Lesseps, the French diplomat who had supervised excavation of the Suez Canal, formed the Compagnie Universelle du Canal InterocÃ©anique and began work in 1881 on cutting a sea-level channel through the isthmus. Poor planning, disease, and accusations of fraud led to the collapse of the enterprise in 1889, and in 1894 the French company was reorganized as the Compagnie Nouvelle du Canal de Panama. In 1903 the Hay-Bunau-Varilla Treaty between Panama and the United States granted the United States canal-building rights and the sole right to operate and control the Canal Zone (q.v.). The Compagnie Nouvelle du Canal de Panama sold its holdings to the United States in 1904. The principal decision facing American engineers was whether to build a sea-level or a high-level, lake-and-lock canal. In 1879 the French engineer Adolphe Godin de LÃ©pinay had proposed damming the torrential Chagres River on the Atlantic side of the isthmus and the RÃ­o Grande on the Pacific side, creating navigable lakes in their respective valleys that would be connected by a cut through the continental divide. Although rejected by the original French company and by early U.S. commissions that favoured a sea-level canal, LÃ©pinay's proposal was the basis for the final plan drafted in 1906 by John F. Stevens, chief engineer of the U.S. Isthmian Canal Commission. Construction under U.S. supervision, which had begun in 1904, accelerated after the U.S. Congress adopted Stevens' plan, and the Panama Canal opened to traffic on Aug. 15, 1914. Following numerous disputes between the United States and Panama over the sovereignty of the waterway, the Panama Canal Treaty of 1977 established that the Republic of Panama would take complete control of the canal in the year 2000. The canal runs due south from its Atlantic entrance, a 7-mile (11-kilometre) dredged channel in LimÃ³n Bay, for a distance of 11.5 miles (18.5 km) to the Gatun (GatÃºn) Locks, a series of three locks that raise ships 85 feet (26 m) to man-made Gatun Lake. It continues south and then southeast through a channel in Gatun Lake for about 23 miles (37 km) to Gamboa, where the Gaillard (Culebra) Cut begins. The channel through the Gaillard Cut is 8 miles (13 km) long and 500 feet (150 m) wide, winding through the continental divide to the locks at Pedro Miguel. At the Pedro Miguel Locks, a single lock lowers ships 31 feet (9.4 m) to a small lake, through which vessels pass one mile to the locks at Miraflores. The Miraflores Locks constitute a 54-foot (16-metre), two-step drop down from the lake level to the sea-level dredged channel, 7 miles (11 km) long, leading to the Pacific terminus in the Bay of Panama. Except for small craft, no vessel can pass through the locks of the Panama Canal under its own power. Vessels are taken in tow by electric towing locomotives that operate on cog tracks on the lock walls; six locomotives are usually used for each vessel. The locks are duplicate, so that ships may pass in opposite directions simultaneously. With waiting time, ships require about 15 to 20 hours to negotiate passage. Crude oil and petroleum products, grains, and coal and coke are among the principal commodity groups transported through the canal.