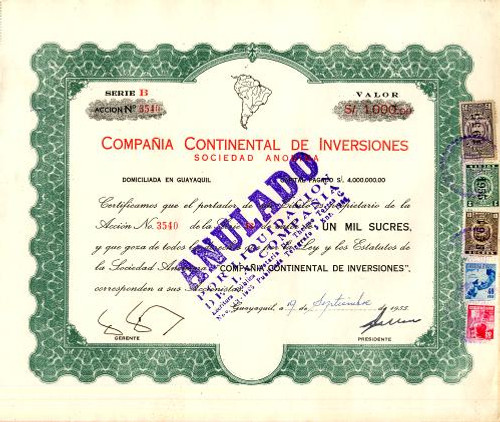 Beautifully engraved certificate from the Compania Continental De Inversiones issued in 1955. This historic document and has an ornate border around it with a vignette of the continent of South America. This item has the signatures of the Company's President and Secretary and is over 61 years old. 5 revenue stamps attached to front of certificate.

Certificate Vignette
Guayaquil was founded on July 25 (see note below), 1538 with the name Muy Noble y Muy Leal Ciudad de Santiago de Guayaquil by Spanish Conquistador Francisco de Orellana. Even before it was founded by the Spanish, it already existed as a native village. Note - July 25 is the legal holiday in Guayaquil. Historians have not yet reached a consensus about the date of Guayaquil's foundation or founder. The city might have been founded more than once. Another possible founder might be Diego de Almagro. In 1600 Guayaquil had a population of about 2,000 people; by 1700 the city had a population of over 10,000. In 1687, Guayaquil was attacked and looted by English and French pirates under George d'Hout (English) and Picard and Groniet (Frenchmen). Of the more than 260 pirates, 35 died and 46 were wounded; 75 defenders of the city died and more than 100 were wounded. The pirates took local women as concubines. Quito paid the ransom demanded by the pirates with the condition they release the hostages and not burn Guayaquil. In 1709, the English captains Woodes Rogers, Etienne Courtney, and William Dampier along with 110 other pirates, looted Guayaquil and demanded ransom; however, they suddenly departed without collecting the ransom after an epidemic of yellow fever broke out. In October 9, 1820, almost without bloodshed, a group of civilians supported by soldiers from the "Granaderos de Reserva", a Peruvian battalion quartered in Guayaquil, overwhelmed the resistance of the Royalist guards and arrested the Spanish authorities. Guayaquil declared independence from Spain. JosÃ© JoaquÃ­n de Olmedo was named "Jefe Civil" of Guayaquil. Monument commemorating the historical conference between SimÃ³n BolÃ­var and JosÃ© de San MartÃ­nOn July 26, 1822, JosÃ© de San MartÃ­n and SimÃ³n BolÃ­var held a famous conference in Guayaquil to plan for the independence of Spanish South America. The city suffered from a major fire in 1896 which destroyed large portions of the city. The city's current mayor (alcalde) is Jaime Nebot, a well-known member of the Ecuadorian political party Partido Social Cristiano, and one of the political rivals of former Ecuadorian president AbdalÃ¡ Bucaram. Nebot began a campaign of construction projects for the city in the late 1990s to attract tourism. One of the projects was called MalecÃ³n 2000 [ma.le.ˈkon Ã°oz ˈmil], the renovation of the breakwater (malecÃ³n) along the Guayas River with the addition of a boardwalk in 2000. Another project was the creation of the Nuevo Parque HistÃ³rico, a park in a housing development area that is called Entre RÃ­os because it lies between the Guayas and Daule rivers, in a mangrove wetland area. The park cost the city about 7 million dollars. It is a refuge for fauna and a zone of historical-architecture preservation, and has a traditions-and-history exhibition center. The idea of the creation of this park came from Ecuador's central bank in 1982, as part of their "Rescate ArquitectÃ³nico" ("Architectural Rescue") program. Las PeÃ±as in Guayaquil Museum of Anthropology and Contemporary Art (MAAC), near the breakwater (photo taken in 2000)Most buildings in downtown Guayaquil have a very attractive and utilitarian feature - the soportales. These are colonnades or arcades that provide protection to pedestrians from the Equatorial sun and torrential rains. These are worthy of study and imitation by architects from other parts of the world. Ecuador is known for its artists and its place in art history. The country is home to some of the most important Master Artists of the last century which include: Enrique TÃ¡bara (b. 1930, Guayaquil), Oswaldo GuayasamÃ­n (b. 1919 - d. 1999, Quito), Eduardo Kingman (b. 1913; d. 1998, Quito), Juan Villafuerte (b. 1945, Guayaquil; d. 1977, Spain), FÃ©lix Arauz (b. 1935, Guayaquil), AnÃ­bal VillacÃ­s (b. 1927, Ambato), Camilo Egas (1889-1962), Humberto MorÃ©, Theo ConstantÃ© (b.1934, Guayaquil), Luis Molinari (b. 1929, Guayaquil) and Manuel Rendon Seminario (b. Paris, 1894 - d.Portugal, 1982). Two of the best football (soccer) teams of the country have been found in Guayaquil, the Barcelona Sporting Club and Club Sport Emelec. The latter is short for "Empresa Electrica de Ecuador" - the team is sponsored by the Electric Power Company. History from Wikipedia and Encyberpedia.