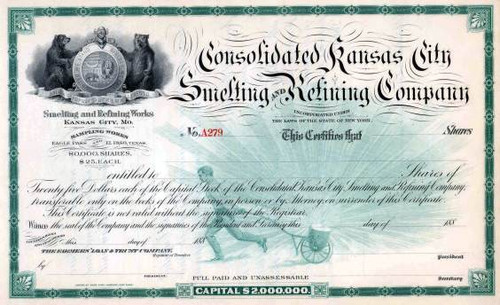 Beautifully engraved unissued certificate from the Consolidated Kansas City Smelting and Refining Company dated 188X. This historic document was printed by the American Banknote Company and has an ornate border around it with a vignette of two bears by a shield ( State Shield ) and an underprint of a man pulling an ore cart. This item is over 125 years old. Smelting and Refining Works in Kansas City, Mo., El Paso, Texas and Leadville, Colorado is printed on the face. 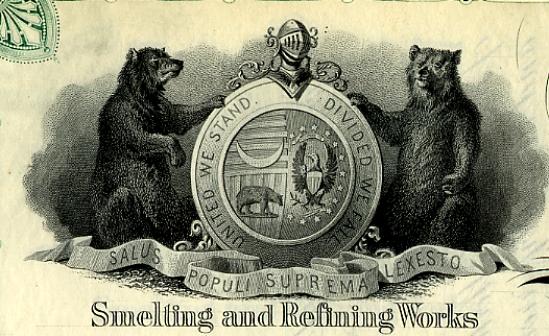 Certificate Vignette
The Kansan as reported in 1889: Delegates of the first Pan American Conference visited The Consolidated Kansas City Smelter and Refining Company at Argentine, Kan., during their cross-country tour of the U.S. in 1889. The smelter -- with a 200-foot smokestack -- was the largest concern of its kind in the world. It covered 10 acres of an 18-acre site, and furnished one-fifth of all the silver bars smelted in the U.S. and one-fifth of the pig lead. With ores for processing shipped from North and South America, Argentine was known as the "Silver Refining Capital of the World." The smelter was organized in 1880 with $50,000 capital. In 1882 the plant was enlarged to twice its original capacity and the capital stock to $300,000. After the consolidation in 1887 of the Arkansas Valley Smelter, the El Paso Smelting Works, the Eagle Pass, Laredo and Mexican Ore Companies and the Kansas City Smelting and Refining Company, the capital stock was increased to $2 million. August R. Meyer, president of the Consolidated Kansas City Smelter and Refining Company, was born in St. Louis, Mo., in 1851. He completed his education in Europe. He was graduated from the School of Mines at Freiberg, Saxony, and the University of Berlin. He studied the science of metallurgy and that of mining engineer. His knowledge of the different kinds of ores, the process of separating the metals and the impurities were practiced at the smelter and refinery. Visits to the Smelter Meyer conducted tours of the plant and was host to delegates of the Pan American Congress. This was the only industry visited during their stay in Kansas City. The first place they were taken to was the assay office, where the process of testing the value of the ores was made. The next stop was the sampling floor. Materials that assist in the smelting process were added. The ores were then ready for the blast furnaces. The Kansas City Gazette reported, "Descending a story to the bottom of the furnaces, the bullion is seen pouring out of a spout at a point into receptacles and the slag at another. "The slag is received into a bowl-shaped barrow two feet in diameter and a foot and a half deep. Some valuable material remains in this. It settles to the bottom, while the part that is only fit for tie ballast remains on top. "When the slag cools the portion containing valuable material is easily separated from the rest by a blow with a hammer and treated again. The slag is sold to the railway companies for ballast. Refining "The pigs of bullion which came from the blast furnace contain gold, silver, lead, zinc and a few minor ingredients," the Gazette continued. "Each pig, weighing from 50 to 75 pounds, is worth about $15," the Gazette continued. "The bullion then goes to the refining department where it is subjected to several processes which separates the silver and gold from the lead. The lead is loaded into cars at the smelter and shipped, while the bricks of silver and gold are shipped by Express" (Wells Fargo). "The silver and gold are not separated by the smelter, this being done at the government mint. "The smelter produces a babbitt material which is further treated and handled by a St. Louis firm." Statistics The smelter's annual business was $18 million. The wages paid to its 500 employees were the highest paid anywhere in the U.S. -- $1.50 a day for laborers and $5 for foremen on the average. The smelter was compared to a packing house in one respect and that was "that everything was utilized except the smoke and every available particle of that was saved. The flues were cleaned and the soot containing a large percent of valuable material was treated again." The smelter was closed in October 1901 and its work force was shifted to smelters nearer to the Colorado ore fields. The Kansas City Structural Steel Company was opened at the old smelter site in June 1907 at 21st and Metropolitan. The smokestack -- the world's largest in 1884 -- was torn down in 1958 to make way for a sewer project. History from the Kansas City, Kansas Public Library. The Kansas City Smelting and Refining Company began operations in 1880 in Argentine. At that time it was described as being "four miles from Union Depot." Its business was refining ores: Zinc, pig lead and bullions -- gold and silver. The ores originated in Mexico and Colorado. Fire destroyed most of the works on Dec. 2, 1886. The works were rebuilt immediately. The capacity was increased form four to seven smelting and two refining furnaces. On Jan. 1, 1887 it was consolidated with the Mexican Ore Company of El Paso, Texas, becoming the Consolidated Kansas City Smelting and Refining Company. The establishment throughout was illuminated by electric light; the company owned its own plant. At one time the smelter employed 1,200 hands and was the largest concern of its kind in the country. Smoke Stack A new smoke stack was built (about 1900) on the north side of Metropolitan near 21st Street, replacing the one on a hill to the south. "Height 187 1/2 ft., Base 26 ft. square, 15 ft. across at top. contains 700,000 bricks and Cost $20,000.00 to build." The stack was built tall to carry the fumes to the currents of air above the hills. Smelter Closed The smelter operated for about 20 years. Several reasons have been given for the closing: It was cheaper to ship Mexican ore to the East by water than by rail to Argentine; new smelters were built nearer the mines in Colorado; a decrease in the demand for silver and the demonetization of the silver money. "Free Silver" was a campaign issue in the Presidential election of 1896. The smelter closed October 1901. History from OldCompanyResearch.com