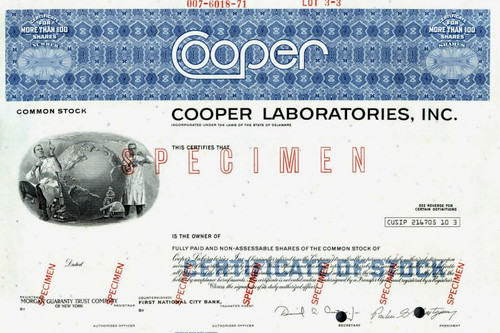 Beautifully engraved specimen certificate from the Cooper Laboratories, Inc. printed in 1971. This historic document was printed by the American Banknote Company and has an ornate border around it with a vignette of two scientist and the company's logo. This item has the printed signatures of the Company's officers. 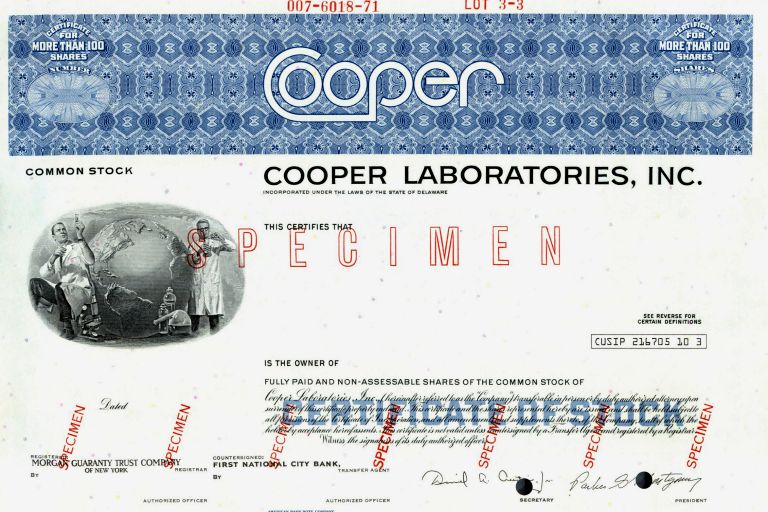 Certificate
The Cooper Companies, Inc. is a US based, multinational company in the medical specialities sector. With its headquarters in Pleasanton, California, it has over 8,000 employees and consists of two subsidiaries, CooperVision (CVI) that provides contact lenses for both wearers and practitioners, and CooperSurgical (CSI) that provides products for health care professionals and establishments that are involved in women's health care. Contact lens sales, in particular, soft toric lenses which correct astigmatism, make up for 80% of Cooper Company sales. Cooper Companies, which is publicly traded on the NYSE Euronext (NYSE:COO) recently announced a revenue increase of 9% to $412.0 million for the fiscal third quarter ended July 31, 2013. Cooper Companies has manufacturing facilities in the UK, Puerto Rico and New York and distributes from Rochester, NY, Fareham, UK and Liege, Belgium, among many other smaller distribution locations. History from Wikipedia, Encyberpedia and OldCompany.com (old stock certificate research service) About Specimen Certificates Specimen Certificates are actual certificates that have never been issued. They were usually kept by the printers in their permanent archives as their only example of a particular certificate. Sometimes you will see a hand stamp on the certificate that says "Do not remove from file". Specimens were also used to show prospective clients different types of certificate designs that were available. Specimen certificates are usually much scarcer than issued certificates. In fact, many times they are the only way to get a certificate for a particular company because the issued certificates were redeemed and destroyed. In a few instances, Specimen certificates were made for a company but were never used because a different design was chosen by the company. These certificates are normally stamped "Specimen" or they have small holes spelling the word specimen. Most of the time they don't have a serial number, or they have a serial number of 00000.