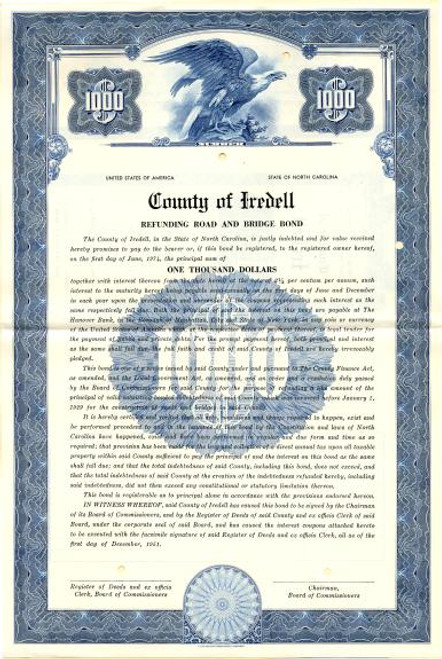 Beautifully engraved specimen from the County of Iredell Refunding School Board dated 1951. This historic document was printed by Columbian Banknote Company and has an ornate border around it with a vignette of an eagle. This item is over 54 years old. The Brown certificate is a Refunding School Bond, the Blue is a Refunding Road and Bridge Bond and the Green is a County Hospital Bond. 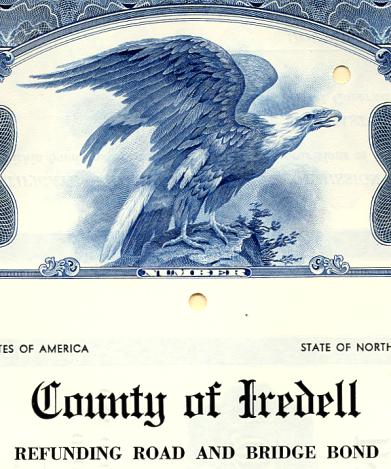 Certificate Vignette
Iredell County was incorporated in 1788 when it was formed from adjacent Rowan County. It is named for Judge James Iredell (1751-1799), Attorney General of North Carolina during the Revolutionary War and a delegate to the Constitutional Convention of 1788. The name Iredell, originally Eyredale, dates back to year 1066 to the Battle of Hastings, and it means "a valley of flowing air. The county seat of Statesville is approximately 45 miles north of Charlotte, and approximately 130 miles west of Raleigh, the state capital. Lake Norman, the nation's largest manmade lake by surface area, extends into the southwest portion of the county with approximately 520 miles of shoreline. Iredell County is in the central section of the State and is bounded by Rowan, Cabarrus, Mecklenburg, Lincoln, Catawba, Alexander, Wilkes, Yadkin and Davie counties. The present land area is 574.13 square miles and the 2000 population was 122,660. Statesville, established in 1789, is the county seat. Topography: The county is dominated by ridges separated by creeks in the valleys. The Brushy Mountains intrude into the northwest corner and include Fox Mountain, with the county's highest elevation of 1,760 feet. The lowest point is 700 feet above sea level where the South Yadkin River crosses the county line and flows eastward along the Davie-Rowan border. At the old courthouse (Iredell County Government Center) is the center of Statesville, and the elevation is 926 feet. The soil is loamy, a mixture of sand and clay which varies in its proportions from one section of the county to another depending on the indigenous mineral structure. To be agriculturally productive, the Iredell soil must be chemically supplemented. The county is, however, naturally well drained and watered by the venation of its numerous creeks. About Specimens Specimen Certificates are actual certificates that have never been issued. They were usually kept by the printers in their permanent archives as their only example of a particular certificate. Sometimes you will see a hand stamp on the certificate that says "Do not remove from file". Specimens were also used to show prospective clients different types of certificate designs that were available. Specimen certificates are usually much scarcer than issued certificates. In fact, many times they are the only way to get a certificate for a particular company because the issued certificates were redeemed and destroyed. In a few instances, Specimen certificates we made for a company but were never used because a different design was chosen by the company. These certificates are normally stamped "Specimen" or they have small holes spelling the word specimen. Most of the time they don't have a serial number, or they have a serial number of 00000. This is an exciting sector of the hobby that grown in popularity and realized nice appreciation in value over the past several years.