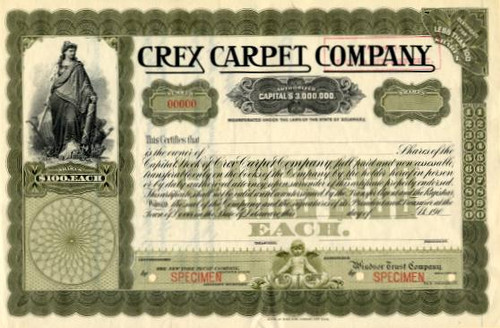 Beautifully engraved Specimen certificate from the Crex Carpet Company dated 1908. This historic document was printed by American Bank Note Company and has an ornate border around it with a vignette of allegorical woman holding a sword. This item is over 97 years old. 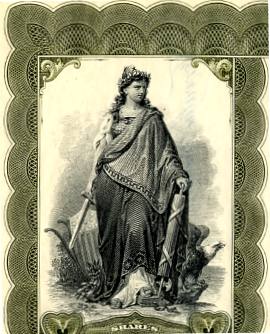 Certificate Vignette
In 1912, the Crex Carpet Company purchased 23,000 acres of what is now called Crex Meadows. The carpet company was an eastern corporation engaged in the production of grass rugs. Three carpet camps (camp numbers five, six, and eight) were located in the area. Each camp employed 50-100 men who harvested "wiregrass" (Carex spp.) from the marshes and shipped it to the factory in St. Paul where it was made into grass carpets. The wire grass industry continued successfully until market conditions and ecological changes in the marsh caused bankruptcy of the Crex Carpet Company in 1933. About Specimens Specimen Certificates are actual certificates that have never been issued. They were usually kept by the printers in their permanent archives as their only example of a particular certificate. Sometimes you will see a hand stamp on the certificate that says "Do not remove from file". Specimens were also used to show prospective clients different types of certificate designs that were available. Specimen certificates are usually much scarcer than issued certificates. In fact, many times they are the only way to get a certificate for a particular company because the issued certificates were redeemed and destroyed. In a few instances, Specimen certificates we made for a company but were never used because a different design was chosen by the company. These certificates are normally stamped "Specimen" or they have small holes spelling the word specimen. Most of the time they don't have a serial number, or they have a serial number of 00000. This is an exciting sector of the hobby that grown in popularity and realized nice appreciation in value over the past several years.