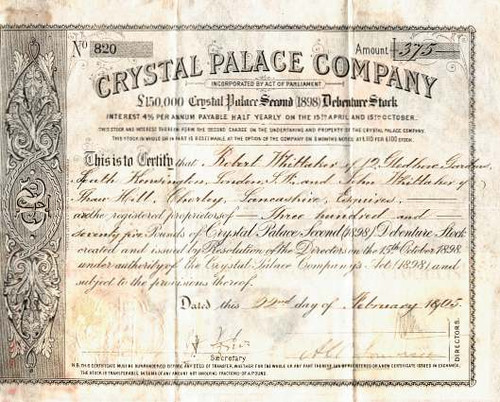 Beautifully engraved certificate from the Crystal Palace Company issued in 1905. This historic document was printed by Charles Letts & Company and has an ornate border around it. This item is hand signed by 2 of the Company's Directors and its Secretary and is over 101 years old. The Crystal Palace was created by Joseph Paxton to house the Great Exhibition of the Industry of All Nations in Hyde Park, London, in 1851. After the Exhibition, it was moved and expanded and rebuilt on Sydenham Hill overlooking London, where it enjoyed a second life from 1854 until its destruction in a horrific fire in 1936. Over 5,000 men worked on the rebuilding of the palace taking almost two years to complete. The palace was opened on June 10th, 1854 by Queen Victoria accompanied by Prince Albert, their children and the King of Portugal. Sir Charles Fox (1810-1874), engineer. His firm Fox, Henderson & Co., undertook the contract for the Crystal Palace. Fox was a gifted engineer and had introduced the use of the switch on railway tracks in place of the sliding rail. He was knighted for his work on the Crystal Palace. He was said to have resented Paxton's knighthood but was soothed by receiving his own. The Crystal memory is today kept alive in the Crystal Palace Museum. It is housed in the only surviving building constructed by the Crystal Palace Company, built in 1872 as a school for practical engineering.