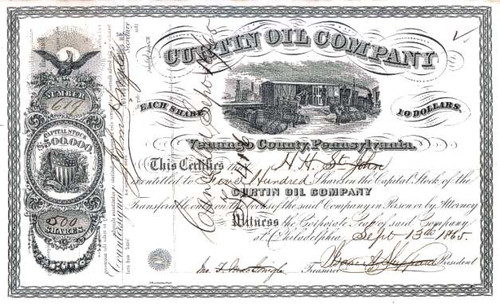 Beautiful stock certificate from the Curtin Oil Company issued no later than 1875. This historic document was printed by the J. Haehnlen Company of Philadelphia and has an ornate border around it with a vignette of men loading barrels of oil on a train. This item has the hand signatures of the Company's President and Secretary and is over 137 years old.

Certificate Vignette
In the nineteenth century, the region and the world was changed forever by Colonel Edwin Drake's drilling of the first commercially successful oil well along Oil Creek near Titusville. In this northwestern Pennsylvania valley, oil once seeped from the ground and flowed into the creek, where it was carefully skimmed by native Americans, who believed it had medicinal properties. Distilled oil was also valuable as lamp fuel, but this was an impractical use, as there was no method of collecting the oil in large quantities. Then, in 1850's, Drake came to the Oil Creek Valley, charged with finding useful amounts of petroleum. Using a drilling technique, he finally struck oil in 1859. It wasn't long before the quiet valley was overflowing with oil and the men who hoped to make their fortunes with the slick stuff. Towns grew up overnight and the native hardwood forests disappeared, replaced by forests of derricks. The hillsides rising above the creek became muddy, oily slopes and the creek was used primarily for the transport of oil barrels. The Oil Creek Valley was in the midst of an economic boom and an ecological disaster. The oil excitement lasted less than two decades. By 1875, the wells were drying up and the speculators packed up to try their luck elsewhere. Nature slowly began reclaiming the valley. In North Philadelphia, there is an Elementary School named after Issac A. Sheppard , and it recently celebrated its 100th year anniversary. History from OldCompanyResearch.com (old stock certificate research service)