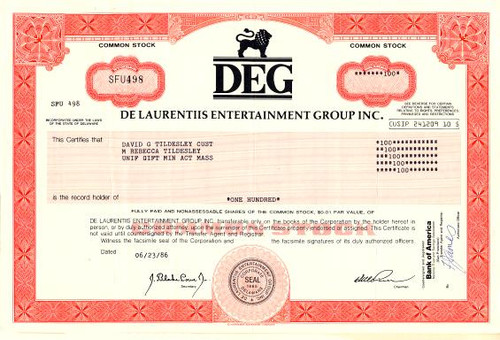 Beautifully engraved certificate from the De Laurentiis Entertainment Group Inc issued in 1986. This historic document was printed by Jefferies Banknote Company and has an ornate border around it with a vignette of the companys logo. This item has the printed signatures of the Company's President and Secretary and is over 19 years old.

Certificate Vignette
Dino De Laurentiis made a number of Movies such as The White Buffalo (1977), Orca (1977), The Hurricane (1979), Ragtime (1981), King Kong (1976) and Madonna's Body of Evidence (1983) and generally ill-regarded genre efforts such as the remake of Flash Gordon (1980), David Lynch's Dune (1984) and Stephen King's Maximum Overdrive (1986). Dino formed The De Laurentiis Entertainment Group in the mid-80s, producing a number of Stephen King adaptations, and in his favour made a few quite good films such as Michael Cimino's The Year of the Dragon (1985), David Lynch's Blue Velvet (1986), the original Hannibal Lecter film Manhunter (1986) and William Friedkin's Rampage (1991), not to mention Bill and Ted's Excellent Adventure (1989). Although by the end of the 1980s de Laurentiis's extravagance had caught up with him and DEG financially collapsed.