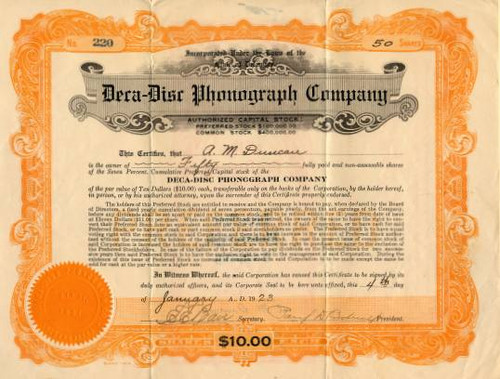 Beautifully engraved certificate from the Deca-Disc Phonograph Company issued in 1923. This historic document has an ornate border around it. This item is hand signed by the Company's President ( Paul D. Bodwell ) and Secretary and is over 83 years old. The Deca-Disc Phonograph Company produced a combination of automatic phonograph and advertising device. It was design patented by Paul D. Bodwell and Henry W. Bellows in the late twenties, and the patent was granted in December, 1931. The combination-model was followed by the Model E Coin-Operated Phonograph which had ten records and continuous play. The name Deca-Disc was registered as a trademark in 1922, but most of the phonograph inventory was bought by the Ristau family around 1928, and became a basis for the coin-op Ristaucrat phonographs of the early thirties.