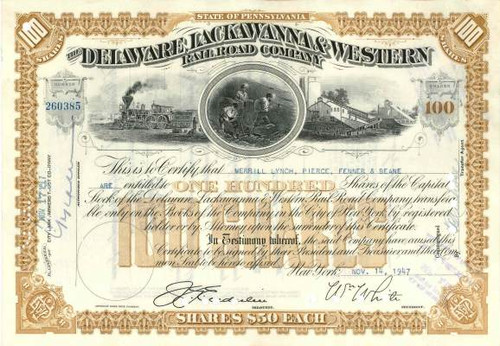 Beautifully engraved certificate from the Delaware, Lackawana & Western Railroad Company issued in 1940's. This historic document has an ornate border around it with a vignette of a train, men working in a mine and a storage facility next to the train tracks. This item has the printed signatures of the Company's President and Trasurer and is over 54 years old.

Certificate Vignette
The Delaware, Lackawana & Western Railroad Company was chartered in 1857 to transport coal out of Pennsylvania's Lackawanna Valley. The line was originally from the Liggits Gap railroad and was extended west to Buffalo, North to Lake Ontario, and East to New York. In 1960 it became a part of the Erie Lackawanna along with the Erie Railroad.