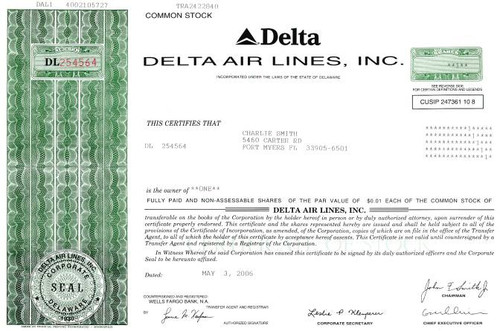 Beautifully engraved certificate from Delta Airlines, Inc.. This historic document was printed by American Financial Printing Incorporated - Minneapolis and has an ornate side-border around it with a vignette of the Company's logo. This item has the printed signatures of the Company's Chairman, John F. Smith, Jr, Chief Executive Officer, and Corporate Secretary, Leslie P. Klemperer.

Certificate Vignette
Delta Air Lines, Inc. (NYSE: DAL) is a major airline based in the United States[10] headquartered in Atlanta. Delta is the world's largest airline operating under a single certificate. Delta operates an extensive domestic and international network, spanning North America, South America, Europe, Asia, Africa, the Middle East, the Caribbean and Australia. Delta and the Delta Connection carriers fly to 348 destinations in 64 countries (excluding codeshare), across six continents. Delta operates the world's largest hub at Hartsfield-Jackson Atlanta International Airport. Delta is a founding member of the SkyTeam alliance. On October 29, 2008, Delta completed its merger with Northwest Airlines to form the world's largest commercial carrier. In February 2009, the airline began consolidating gates and ticket counters at airports where both Delta and Northwest operate. The consolidation was completed February 2010. On December 31, 2009, the Federal Aviation Administration granted Delta's request to allow Delta and Northwest to operate under a single operating certificate. Formed as Huff Daland Dusters, Incorporated, an aerial crop dusting operation, on May 30, 1924, in Macon, Georgia, the company moved to Monroe, Louisiana in Ouachita Parish in northeastern Louisiana, in 1925, and began acting as a passenger airline in late 1929. Collett E. Woolman purchased the company on September 13, 1928, and renamed it Delta Air Service, with headquarters in Monroe. In the ensuing decades, Delta grew through the addition of routes and the acquisition of other airlines. It transitioned from propeller planes to jets in the 1970s, and entered international competition to Europe in the 1970s and across the Pacific in the 1980s. Defunct airline brands operated by Delta
Delta Express began service in October 1996 in an attempt by Delta to compete with low cost airlines on leisure-oriented routes. Its main base of operations was Orlando International Airport and it used Boeing 737-200 aircraft. It ceased operations in November, 2003 after Song was established. Northwest Airlines was acquired on October 29, 2008 to form the world's largest airline. After approval of the merger, Northwest continued to operate as a wholly-owned subsidiary of Delta until December 31, 2009 when both carriers' operating certificates were merged (the Delta certificate survived). Delta completed the acquisition of Northwest on January 31, 2010 when their reservation systems/websites were combined, officially retiring the Northwest Airlines name and brand. Song began service on April 15, 2003 as a single-class airline operated by Delta to compete directly with JetBlue Airways from both airlines' hubs at New York-JFK. While the brand was considered a successful addition to the Northeast-to-Florida market, financially the airline suffered. On May 1, 2006, Song was folded into the Delta mainline brand. The "Song" entertainment system will remain in place on certain long-haul domestic flights. Additionally, all former "Song" aircraft have been reconfigured to accommodate 26 First/158 Economy passengers. These aircraft are now focused primarily on trans-continental flights from JFK and ATL. Song used Boeing 757 aircraft. Western Airlines was acquired on December 16, 1986, and was operated as a separate airline by Delta for over three months. In a case by a union to stop the workforce integration, the U.S. Supreme Court wrote "On December 16, 1986, shareholder approval of the merger was confirmed and Western Airlines became a wholly owned subsidiary of Delta." The changeover date for discontinuation of the Western Airlines brand and the date for merger of the two airlines' workforce was April 1, 1987. After the merger, Delta eventually released the name Western Airlines. Delta has maintained Western's former Salt Lake City hub on almost all routes and has added many more destinations; it also uses the former Los Angeles International Airport hub as a gateway to Mexico's vacation destinations, Hawaii, and Australia. History from Wikipedia and OldCompany.com (old stock certificate research service)