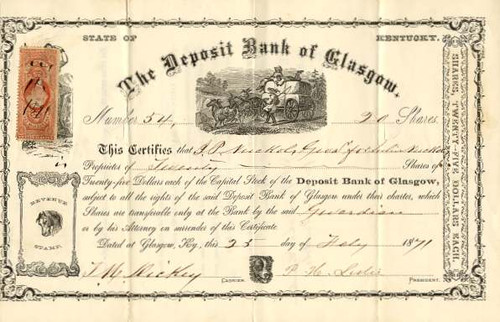 Beautifully engraved certificate from the Deposit Bank of Glasgow issued in 1871. This historic document has an ornate border around it with a vignette of a carriage being pulled by horses. This item is hand signed by the Company's President and Cashier and is over 133 years old. 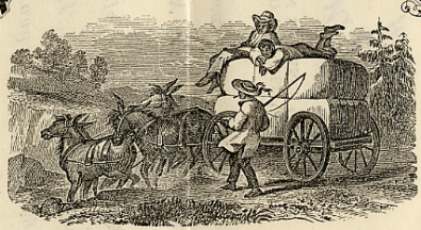 Certificate Vignette
In the spring of 1872 Jessee James and his gang planned to rob the Deposit Bank of Glasgow. Frank JAMES, brother of Jesse, was at that time living in Nashville, under an assumed name, he conducted a livery stable. He planned the raid. His brother, Jesse, led seven men through Glasgow to Columbia. While passing through Glasgow, they made plans to return and rob the bank here after the Columbia job, before a warning had time to beat them here. The gang approached the Columbia bank, and met at an agreed spot, riding straight in to the bank at three o'clock in the afternoon. Three dismounteddd .... killing Mr. MARTIN, cashier of the bank, a cowardly thing. Judge James GARNETT, of Columbia, was one of the men as having been at the bank during the hold-up. He saved his life by knocking up the pistol of one of the bandits as they dashed out of the bank, firing as they went. They returned straight to Glasogw, but met a party of hunters on horse back as they approached town. Thinking that somehow word had reached Glasgow of the Columbia affair and the men were a possee out looking for them, they quietly disbanded and fled in separate directions, meeting many miles from Glasgow and they did not return." The joke was on the JAMES gang, for the men on horseback were only returning from a harmless game hunt, and didn't have their guns loaded."