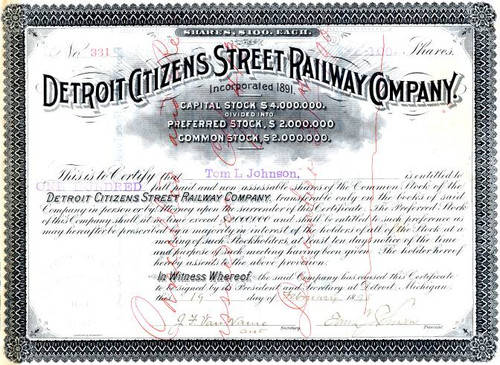 Beautiful certificate from the Detroit Citizens Street Railway Company printed in 1895. This historic document has an ornate border around it with a vignette of the Company's name. This item has been hand signed by the Company's President, Tom L. Johnson, and Secretary, and is over 117 years old. The certificate is issued to Tom L. Johnson and is signed by him on the back.

Certificate Vignette
Thomas Loftin Johnson (July 18, 1854 April 10, 1911), better known as Tom L. Johnson, was an American politician of the Democratic Party from the late 19th and early 20th centuries. He headed relief efforts after the Johnstown, Pennsylvania floods of 1889, was a U.S. Representative from 18911895 and the 35th mayor of Cleveland, Ohio between 1901 and 1909. In 1903, he was the Democratic nominee for Governor of Ohio. Johnson was born in Georgetown, Kentucky. His early formal education was very limited. Johnson's first employment was with a street-railway company, where he rapidly rose to positions of responsibility. He invented a pay-box for trolleys and became wealthy from licensing the patent. He began investing in street railways in Indianapolis, Cleveland, and Detroit. He made these lines profitable by the introduction of through fares and transfers. Johnson then became principal owner and president of the Detroit City Railways after leaving Congress in 1895. Later he sold his stake in DCR in 1899 and moved to Cleveland to reenter politics. Johnson was an advocate of Henry George's single tax. Today, a statue of Johnson stands in Cleveland's Public Square depicting him holding Henry George's book, "Progress and Poverty." Though opposed to the free coinage of silver, he supported Bryan in 1896 and 1900, and the state convention which he controlled unanimously endorsed the Kansas City platform. He also advocated public ownership of public utilities. He retired from public service in 1910. Today, Johnson is considered a great influence in the progressive movement in the United States that took place in the early 20th century. Tom Johnson advanced a program of lower streetcar fares, public baths, milk and meat inspection standards, and an expanded park system. These reforms, along with his goal to make government more efficient, granted him great adulation among his constituents. Between the years 1863 and 1900 approximately twenty-nine streetcars companies had operated either horse-drawn or electric powered streetcars along streets in and around the city of Detroit. By the year 1897, there were only three city companies remaining. The largest and oldest of the companies -- the Detroit Citizens Street Railway (a successor to the Detroit City Railway, the city's original 1862 franchise holder) -- also held the controlling interest in the two smaller companies. After surviving the final legal battle involving Hazen S. Pingree's 10-year attempt to take-over their street railway operations, representatives from the three remaining city companies, along with the previously consolidated suburban railway operation, announced to the press on December 30, 1900, that all of the streetcar systems in the Detroit area were to be consolidated into one new system. The Detroit Citizens Street Railway, the Detroit Electric Railway, the Detroit, Fort Wayne and Belle Isle Railway, and the Detroit Suburban Railway were all to be absorbed into the newly formed Detroit United Railway. This new company, better known as the DUR, would begin operations on Monday, December 31, 1900. The DUR now provided street railway service within both the city of Detroit, and its surrounding suburbs. History from Wikipedia, Detroit's Street Railways and OldCompany.com (old stock certificate research service)