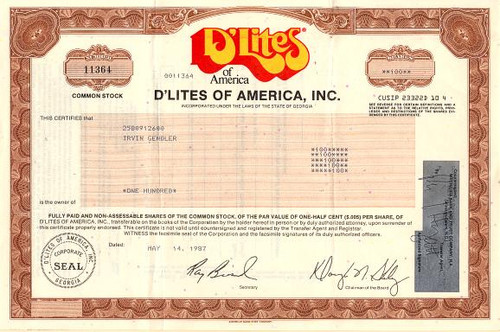 Beautiful certificate from the D'Lites of America issued in 1987. This historic document was printed by American Banknote Company and has an ornate border around it with a vignette of the company logo. This item has the signatures of the Company's President and Secretary and is over 20 years old. 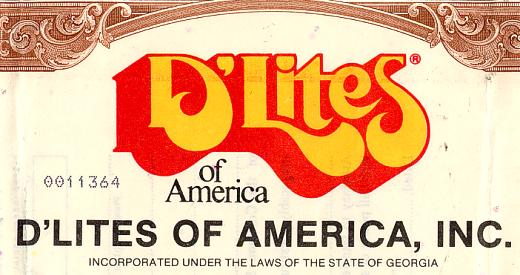 Certificate Vignette
In 1981 the fast-food chain called D'Lites hit the scene, offering lean burgers on multigrain buns and a big salad bar. The Atlanta-based chain's founder, Doug Sheley, thinking that healthier fast food would resonate with an increasingly fitness-crazed America, boldly predicted that he would have 1,000 locations and sales of $1 billion by 1991. Starting with a single store in a good location in downtown Atlanta in the early 1980s, the business quickly mushroomed. By 1985 sales had doubled from the previous year, and new restaurants continued to open. D'lites, in its heyday, was operating more than 100 restaurants and had sold franchise and development rights for 836 locations. While some were skeptical--"fat, er, slim chance," sneered one business magazine--D'Lites generated enough buzz to warrant an IPO in September 1984, and its stock zoomed on the first trading day. The fast-food giants took notice. Wendy's soon offered up a multigrain bun, Burger King tried a low-sodium pickle, and McDonald's even tested a Lite version of its signature Big Mac. "Everyone is getting on the bandwagon," said a USDA nutritionist at the time. But not for long. Customers may have been intrigued by the novelty of D'Lites, but they didn't come back for seconds. D'Lites started posting losses in 1985 and filed for Chapter 11 in August 1986; it dissolved in 1987. History from Wikipedia and OldCompanyResearch.com (old stock certificate research service).