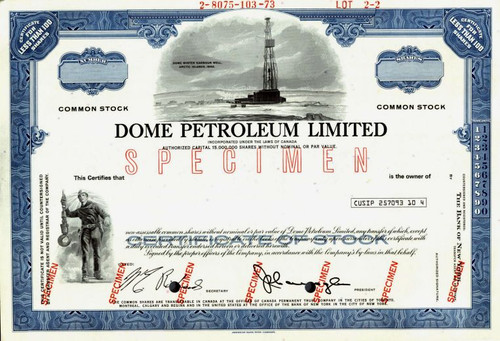 Beautifully engraved specimen stock certificate from Dome Petroleum Limited printed in 1973. This historic document was printed by the American Banknote Company and has a vignette of the Dome Winter Harbour Well, Artic Islands 1962. This item has the printed signatures of the Company's Chairman, Jack Gallager and Secretary, and is over 42 years old. 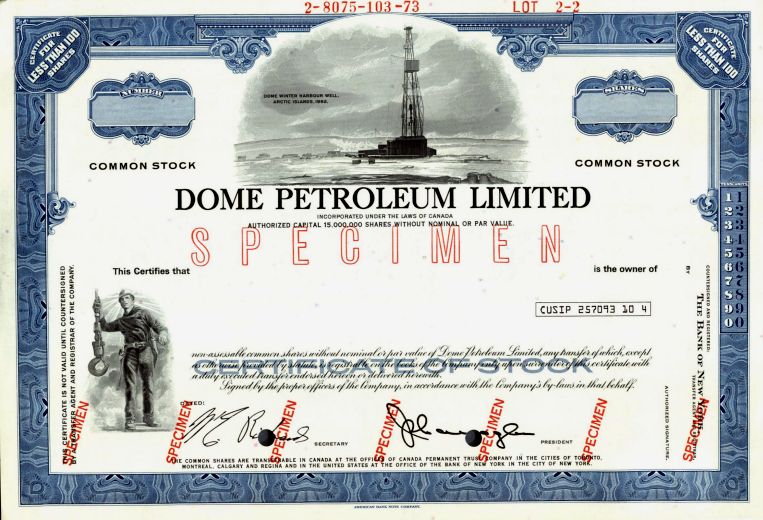 Certificate
Dome Petroleum Limited was a Calgary-based petroleum producer in the Alberta oilfields. Jack Gallager joined a group of investors in Dome Exploration (Western) Ltd. in 1950 and built it into the major Canadian oil company Dome Petroleum Limited (to which it was renamed in 1958). Gallagher was the sole employee for the first two years. However, James McCrea, who was instrumental in building Dome Mines into one of the giants of the Canadian mining industry, is credited with originally creating Dome Exploration (Western) Ltd. Charles Dunkley was Dome's third employee and became Dome's Senior Vice President and Jack's management partner. "Charlie" had a reserved management style and the pair worked well together especially in the early days when they ran a tight management ship. Dome grew by making acquisitions in the energy industry, notably the 1981 acquisition of a 52.9% interest of Hudson's Bay Oil and Gas Company Limited through its wholly owned subsidiary, Dome Energy Limited. Dome was active mainly in Western Canada, the Beaufort Sea and the Arctic islands. The company developed serious problems as a result of the 1986 drop in world oil prices and substantial debts from past takeovers. In November 1987, after months of negotiation, an agreement in principle was reached that to the sale of the company. Upon his death, Gallagher was recognized as a masterful lobbyist and a pioneering, if controversial, figure in the history of Canadian energy development. Stock research by OldCompany.com (old stock certificate research service).

Cardiodynamics (Vignette of a Heart) - Nevada 1973