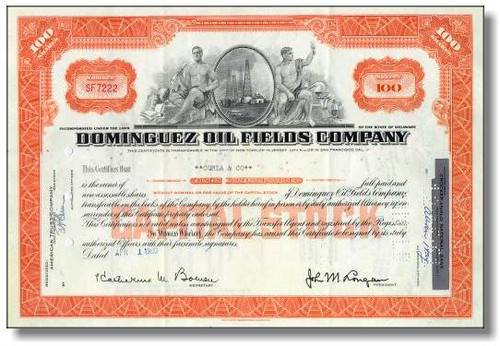 Beautifully engraved certificate from the Dominguez Oil Fields Company issued in 1960-1961. This historic document was printed by the Security Banknote Company and has an ornate border around it with a vignette of two allegoric men flanking old oil drilling platforms. This item has has the printed signatures of the company's president and secretary and is over 39 years old. The Dominguez Oil Fields are located in Los Angeles County, California. The Dominguez Oil Fields Company is now owned and cortroled by Shell Oil. Below is a history of the Dominguez Ranch: The Rancho San Pedro, which came to be known as the Dominguez Ranch, began as a generous gift of 75,000 acres of land to a Spanish soldier in 1784. The soldier's name was Juan Jose Dominguez. Forty three years later, in 1827, his nephew, Manuel Dominguez, built this adobe home for his new bride. Don Manuel Dominguez The vast Rancho spread out across most of what is now the South Bay region, from the Los Angeles River on the east, to the Pacific Ocean on the west. It encompassed what is now Torrance, Carson, Redondo Beach, and the L.A. Harbor. At the ranch's center, perched atop Dominguez Hills, was the home of the Dominguez family. The adobe ranch home contained six good-sized rooms, including a chapel. The home was built to last, with two-foot thick walls, heavy timbers and a flat, tarred roof. One hundred and seventy years later, it is still standing, and is open to visitors as an historical museum. The Victoria Carson Room Since supplies were scarce in Old Los Angeles, most of the original furniture for the Dominguez family home had to carried by sailing ship around the cape of South America. Many of these furnishings are still on display at the Dominguez Ranch adobe. Don Manuel Dominguez was one of the very few citizens of his era to hold public office under both the Mexican and U.S. governments in California. Before 1857, he was elected three times as Acalde (Mayor) and Judge; he was chosen as a delegate to the convention in Monterey which drew up the first State Constitution, and he later served as a Supervisor for Los Angeles County. The rancho was also the scene of the skirmish known as the "Battle of Rancho Dominguez", in 1846, during the U.S.-Mexican War. When the railroad was built between Los Angeles and the harbor in 1869, Manuel Dominguez donated land from the rancho for the the new venture. The Dominguez home also served as a convenient and hospitable stopover for travelers on horseback or for those taking the stagecoach between the Pueblo and the San Pedro port. (Today, the L.A. Harbor is one of the largest and busiest ports in the world.) Manuel Dominguez & his bride, Engracia, raised six daughters at the adobe home, who are remembered today by the many streets and businesses named after their families. One of the Dominguez daughters, Susana, married a man named Del Amo (a name familiar to anyone in the South Bay because of the giant Del Amo Fashion Center mall in Torrance). Another Dominguez daughter, Dolores, took a husband named Watson (known today for the Watson Land Company and Industrial Centers). A third daughter, Maria Victoria, married a successful businessman named George Henry Carson. George & Victoria Carson moved into the Rancho's adobe home, where they lived until the 20th century dawned. The city of Carson is named after their son, John Manuel Carson, a key figure in the development of the South Bay in the 20th Century, and the head of the Dominguez Water Corporation. Perched atop a gentle hill, and surrounded by acres of well-tended landscaping, the 170-year-old Dominguez Ranch Adobe is a peaceful oasis in the Los Angeles urban sprawl. The adobe home has been listed as California Historical Landmark No. 152. It is now an historical museum, open to the public for informative guided tours, during which visitors can learn more about life in the early days of Old California.