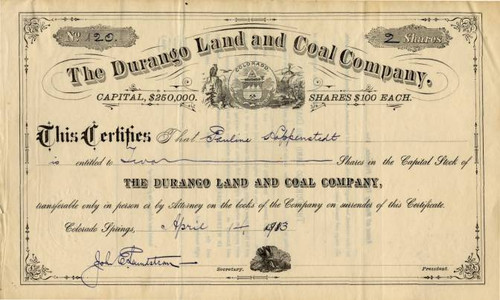 Beautiful RARE stock certificate from the Durango Land and Coal Company issued in 1913. This historic document has an ornate border around it with a vignette of the state seal. This item has the original signature of the Company's Secretary, and is over 100 years old. This is the first time we have seen this company's certificate for sale and we only have one. 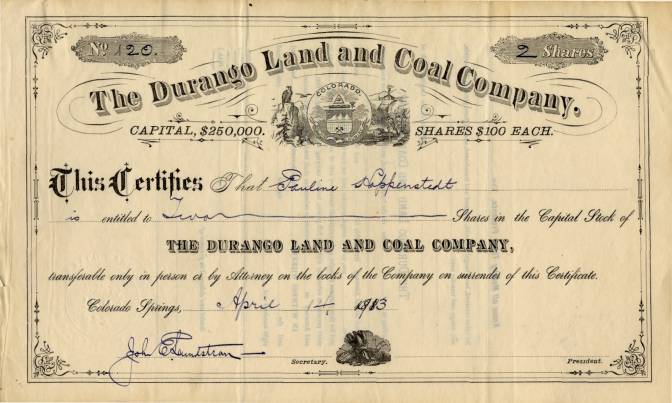 Certificate
The town of Durango was organized in September 1881 by the Denver and Rio Grande Railroad (D&RG) to serve the San Juan mining district. The D&RG chose a site south of Animas City for its depot after Animas City refused to pay a dowry to the D&RG. The city is named after Durango, Mexico, which was named after Durango, Spain. The word Durango originates from the Basque word "Urango" meaning "water town". Before there was the City of Durango there was Animas City--it was located north of the current city of Durango. Animas City was founded 1876, the same year Colorado became a state. It was named after the nearby Animas River--El Rio de las Animas Perdidas (River of Lost Souls).The City consisted of farmers, ranchers, miners, and a newspaper. It was also home to Camp Animas-cavalry and infantry named after the Ute agent. 1880--Animas City was a small bustling community north of current City of Durango was the trade center of the area and had 286 residents. 1879-1880: Denver & Rio Grande Railway built the San Juan Extension into the valley in 1881 and founded a new town. Durango was surveyed and platted in September 1880. Durango was located 2 miles south of Animas City. Most businesses moved from Animas City to Durango and in 1948 Animas City annexed to Durango. Clash of D&RG with Animas City: Animas City wanted a dowry (land for depot, grading, purchase of stock) from the train. Animas City held its ground and the train chose to form a new city for this opportunity: Durango. Name "Durango" means water town, there was a Durango Mine and also Durango, Mexico and Durango, Spain. Some people wanted to name it Palmer City after D&RG visionary or Smelter City after the smelter. Durango Trust--a business group composed largely of D&RG Railway investors who decided to bypass Animas City-seeking cheap land from homesteaders. Investors paid $105,000 to start the city. 1880 William Bell, a friend of William Palmer, buys 160 acres for $500 and donates land for school, City Hall William Palmer--Denver & Rio Grande founder, donated land for city to use City of Durango was well planned and had 200 residents by Christmas of 1880. Durango became commercial center of the Southwest: mining, smelting, logging, banking, agriculture. Streets were planned: Main Avenue--wholesale business, 2nd Avenue--retail business, 3rd Avenue--residential street 1881 Smelter in operation on Smelter Mountain--business stole much from Silverton's economy. Was successful partially due to the coal available in Durango--"black diamonds". John Porter decided to locate the smelter in Durango due to cheap fuel, labor, climate, and ore to the smelter on a downhill route. Porter was a smelting brainchild. In 1887, they smelted 1 million pounds of silver, lead, gold and copper and were largest employers with 300 men employed at a time. The smelter gave off air that smelled like rotten eggs as the smelting process: crushed the ore, heated and mixed with chemicals to make gold and silver bullion. 1881--Government forms to combat unruliness. Wild youth, feuds between Colorado & Farmington, New Mexico over cattle and range land. These were the shenanigans that Hollywood and TV Westerns portray! Check your weapons at the bar. Durango becomes County Seat. There were 20 saloons and 8 more surveyed. Lawlessness in the City--Ike Stockton commits the first hold up, no jail at this time. Caroline Romney, writes "The Record" newspaper, coins Durango as the "City in the Wilderness". She wanted Durango to be the Capitol of Colorado. Silverton drove out gambling houses to Durango. 1884--Trust turns into a company: Durango Land and Coal Company 1886--Nearby town of Cortez made a city with no train service it is not considered a threat. 1887--electric lights 1893--Brookside addition to Durango--now there is only a hotel on the site. Crash of 1893: Depression followed, silver mining never rebounds. First football game played in Durango. 1904--Animas City School formed 1905--San Juan National Forest created 1909--Three theatres operating in town 1911--100 year flood, worst in history of Durango, water 4 ft deep in some streets. First cars come to Durango. 1914--Durango Club formed and later became the Chamber of Commerce 1919--Flu epidemic hits area 1920s-Bootleggers, speakeasies. Ku Klux Klan, abundance of agriculture 1925--Tourism focus for Durango--"Come play and you'll want to stay" motto. 1929--Durango/La Plata County Airport opens 1930s--Population of Durango hits 5,000 people 1934--Gasoline cost 34 cents a gallon, Municipal golf course opens 1940s-Smelter facility closes 1957- Fort Lewis College dedicated 1960s-Purgatory Ski Resort opens History from the Durango Area Tourism Office, Wikipedia, OldCompany.com and SavingsBonds.pro (collectible Savings Bonds website)