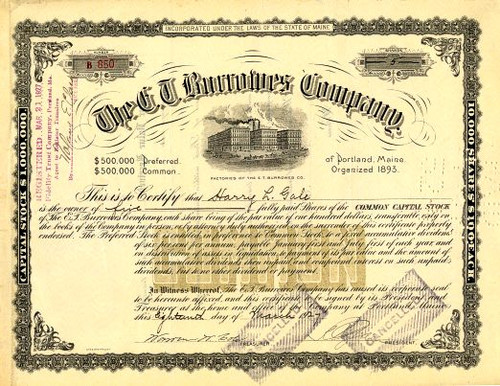 Beautiful certificate from the E.T. Burrowes Company issued in 1927. This historic document was printed by Gies and Co. Buffalo, N.Y.and has an ornate border around it with a vignette of the company's factories. This item has the signatures of the Company's President and Secretary and is over 89 years old. 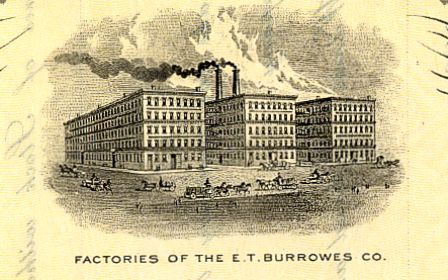 Certificate Vignette
E.T. Burrowes Company ( Edward T. Burrowes Co.) Portland, Maine (1878-1928) Company Made: Levels, Rules, Pool Tables and Wooden Planes E.T. Burrowes Company was primarily a maker of a sliding wire screen patented in 1878; the tools he marked were special types used to install that screen" including a sliding and folding rule patented 24 Mar. 1891. Burrowes made one plane in particular in large quantities, as it has frequently appeared in tool chests and collections purchased by the Liberty Tool Co. over the past thirty years, and that is the screen making plane. Burrowes' mark is printed on the side of this screen making plane in large block letters (E.T. BURROWES CO., MANUFACTURERS, PORTLAND MAINE, and other variations). The company also made furniture items such as pool tables, cedar chests and old crank phonograph cabinets.