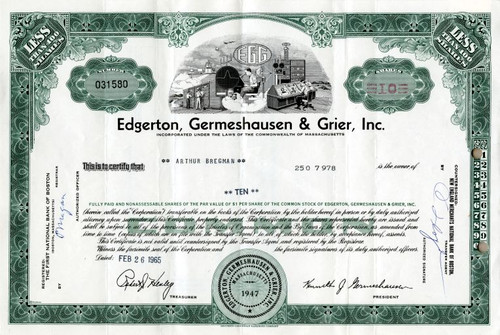 Beautiful RARE uncancelled stock certificate from the Edgerton, Germeshausen & Grier, Inc. issued in 1965. This historic document was printed by the Security Columbian Banknote Company and has an ornate border around it with a vignette of Scientists and Research Personnel working in different labs. This item has the printed signatures of the Company's President, Kenneth Germeshausen. 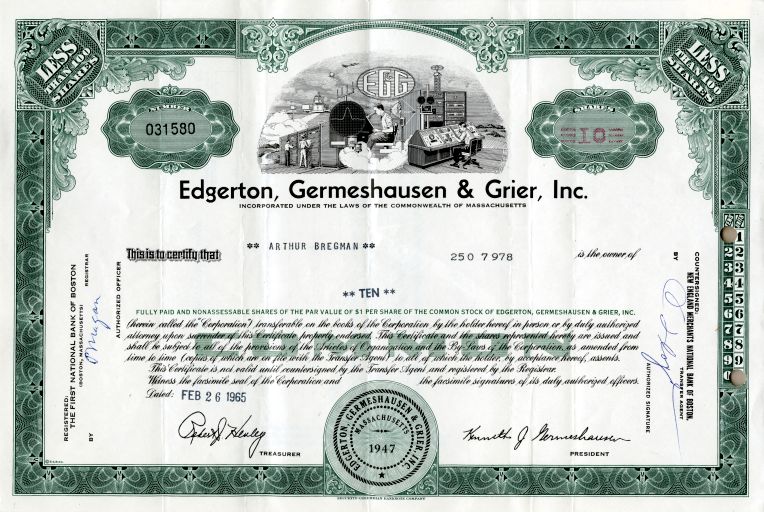 Certificate
EG&G, formally known as Edgerton, Germeshausen, and Grier, Inc., was a United States national defense contractor and provider of management and technical services. The company was involved in contracting services to the United States government during World War II and conducted weapons research and development after the war. Its close involvement with some of the government's most sensitive technologies has led to its being cited in conspiracy theories related to Department of Defense black projects. In 1931, MIT professor Harold Edgerton (a pioneer of high-speed photography) partnered with his graduate student Kenneth Germeshausen to found a small technical consulting firm. The two were joined by fellow MIT graduate student Herbert Grier in 1934. Bernard "Barney" O'Keefe became the fourth member of their fledgling technology group. The group's high-speed photography was used to image implosion tests during the Manhattan Project. The same skills in precisely timed high-power electrical pulses also formed a key enabling technology for nuclear weapon triggers. After the war, the group continued their association with the burgeoning military nuclear effort and formally incorporated Edgerton, Germeshausen, and Grier, Inc. in 1947. During the 1950s and 1960s, EG&G was involved in nuclear tests as a major contractor for the Atomic Energy Commission. EG&G made extensive use of the Nevada Test Site (NTS) for weapons development and high-technology military testing at Nellis AFB. EG&G has shared operations responsibility for the NTS with Livermore Labs, Raytheon Services Nevada, Reynolds Electrical and Engineering (REECO) and others. Subsequently EG&G expanded its range of services, providing facilities management, technical services, security, and pilot training for the U.S. military and other government departments. EG&G builds a variety of sensing, detection and imaging products including night vision equipment, sensors for detection of nuclear material and chemical and biological weapons agents, and a variety of acoustic sensors. The company also supplies microwave and electronic components to the government, security systems, and systems for electronic warfare and mine countermeasures. 1970s and 1980s During the 1970s and 1980s, the company, then led by O'Keefe, diversified by acquisition into the fields of paper making, instrumentation for scientific, marine, environmental and geophysical users, automotive testing, fans and blowers, frequency control devices and other components including BBD and CCD technology via their Reticon division. In the late 1980s and early 1990s most of these divisions were sold, and on 28 May 1999, the non-government side of EG&G Inc. (formerly NYSE: EGG) purchased the Analytical Instruments Division of PerkinElmer for US$425 million, also assuming the PerkinElmer name (NYSE: PKI). At the time EG&G was based in Wellesley, Massachusetts, and made products for diverse industries including automotive, medical, aerospace and photography. 1999present From 1999 until 2001, EG&G was wholly owned by The Carlyle Group. In August 2002, the defense-and-services sector of the company was acquired by defense technical-services giant URS Corporation. URS' EG&G division is headquartered in Gaithersburg, Maryland, and employs over 11,000 people. During its heyday in the 1980s, EG&G had about 35,000 employees. In December 2009, URS announced its decision to discontinue the use of "EG&G" as a division name. The headquarters issued a press release stating that by 1 January 2010, it would discontinue using secondary corporate brands, including the EG&G name and logo. In the same press release, URS stated that it would also retire two other acquired brands, Washington Group and Lear Siegler. URS Chief Executive Officer Martin Koffel explained the change in an e-mail transmitted to employees: "In today's marketplace, it is essential we present a consistent, unified brand to our customers and achieve the competitive advantages enjoyed by our peers in the industry. ... This change will allow us to present a single brand that is easily understood by our clients." Koffel indicated that the move to a single corporate brand would affect neither the internal organization nor the existing reporting structure. However, EG&G Division will become URS Federal Services. Janet Airlines EG&G's "Special Projects" division was the notable operator of the Janet Terminal at McCarran International Airport in Las Vegas, NV, a service used to transport employees to remote government locations in Nevada and California. EG&G also had a joint venture with Raytheon Technical Services, creating JT3 LLC in 2000, which operates the Joint Range Technical Services contract. History from Wikipedia, Encyberpedia and OldCompany.com (old stock certificate research service)