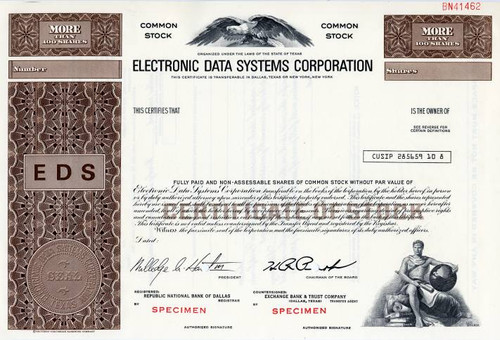 Beautiful specimen certificate from the Electronic Data Systems Corporation of Texas . This historic document was printed by the Security-Columbian Banknote Company and has an ornate border around it with a vignette of an eagle. This item has the printed signatures of the Company's President, and Chairman of the Board, H. Ross Perot. 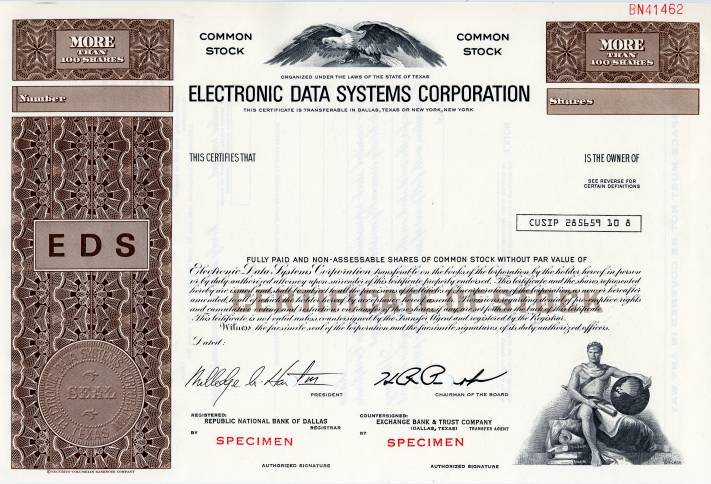 Certificate
Henry Ross Perot born June 27, 1930) is an American businessman best known for being an independent presidential candidate in 1992 and 1996. Perot founded Electronic Data Systems (EDS) in 1962, sold the company to General Motors in 1984, and founded Perot Systems in 1988. Perot Systems was bought by Dell for $3.9 billion in 2009. On February 20, 1992, he appeared on CNN's Larry King Live and announced his intention to run as an independent if his supporters could get his name on the ballot in all fifty states. With such declared policies as balancing the federal budget, opposition to gun control, ending the outsourcing of jobs and enacting electronic direct democracy via "electronic town halls", he became a potential candidate and soon polled roughly even with the two major party candidates. Perot's candidacy received increasing media attention when the competitive phase of the primary season ended for the two major parties. With the insurgent candidacies of Republican Pat Buchanan and Democrat Jerry Brown winding down, Perot was the natural beneficiary of populist resentment toward establishment politicians. On May 25, 1992, he was featured on the cover of Time with the title "Waiting for Perot", an allusion to Samuel Beckett's play Waiting for Godot. With an estimated net worth of about US$3.5 billion in 2012, he is ranked by Forbes as the 134th-richest person in the United States. About Specimen Certificates Specimen Certificates are actual certificates that have never been issued. They were usually kept by the printers in their permanent archives as their only example of a particular certificate. Sometimes you will see a hand stamp on the certificate that says "Do not remove from file". Specimens were also used to show prospective clients different types of certificate designs that were available. Specimen certificates are usually much scarcer than issued certificates. In fact, many times they are the only way to get a certificate for a particular company because the issued certificates were redeemed and destroyed. In a few instances, Specimen certificates were made for a company but were never used because a different design was chosen by the company. These certificates are normally stamped "Specimen" or they have small holes spelling the word specimen. Most of the time they don't have a serial number, or they have a serial number of 00000.