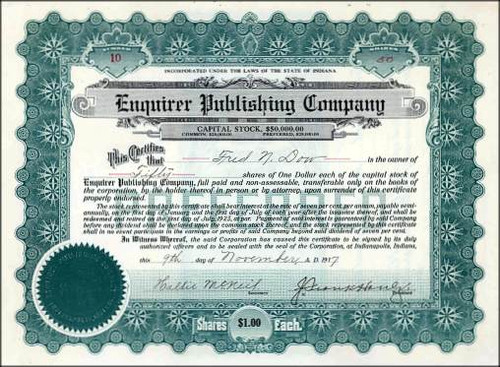 Beautifully engraved certificate from the Enquirer Publishing Company issued in 1917. This item is hand signed by the Company's President, J. Frank Hanly and Secretary and is over 101 years old. J. Frank Hanly The life of J. Frank Hanly offers many parallels to that of other distinguished statesmen who rose from humble beginnings. He was born in a log cabin in Champaign, Illinois, April 4, 1863, and the exigencies of poverty afforded him only a few months attendance at the local schools. His natural love of study, however, caused him to seize every opportunity for self-education, and he was, even in early youth, a voracious reader. At the age of sixteen Mr. Hanly came to Williamsport, Indiana, where he married Miss Eva A. Simmer. He mingled school-teaching, the reading of law and manual labor in the effort to support his wife and two children. He was admitted to the bar in 1889, and two years later became a State Senator. His political progress was brilliant and rapid. He was early acclaimed a most effective orator, and as a campaign speaker contributed enormously to the success of the Republican party in numerous campaigns. He became a Congressman in 1894, and missed election to the Senate, a few years later, by only three votes. In 1904 he was elected Governor of Indiana by the largest majority ever given a govcrnmental candidate in this state. Always an ardent advocate of the cause of prohibition, he became the Presidential candidate of the Prohibition party. He travelled all over the United States lecturing in the interest of prohibition, suffrage, and. other reform measures, and was popularly acclaimed because of his power and skill as an orator. His style was Simple and natural, but very intense ; his use of English was dignified, dramatic, and masterful; he belonged to the older school of orators, and because of his great earnestness and the sincere emotion with which he regarded the causes he advocated, his discourse was seldom lightened by humor. In 1913 he took part as a leader in the formation of the Flying Squadron of America, and was active throughout the campaign. In 1915 he led in establishing the Enquirer Publishing Company and founding the National Enquirer of which he was editor-in-chief, and in incorporating the Flying Squadron foundation of which he was president. He spent several months in France, under the auspices of the Indianapolis Foundation and the United Committee on War Temperance Activities in the Army and Navy, speaking from two to five times a day to American soldiers on the subject of the prohibition amendment and the necessity of their upholding it on their return home to private life. He crowned his career recently by appearing in the United States Supreme Court, saying the last word heard by that body before the decisions which so completely sustained the Eighteenth amendment and the Volstead act, and which also fixed forever the ratification of the suffrage amendment by the Ohio legislature. Mr. Hanly was killed August 1, 1920, in an automobile accident near Dennison, Ohio, while on his way to fill a lecture engagement.