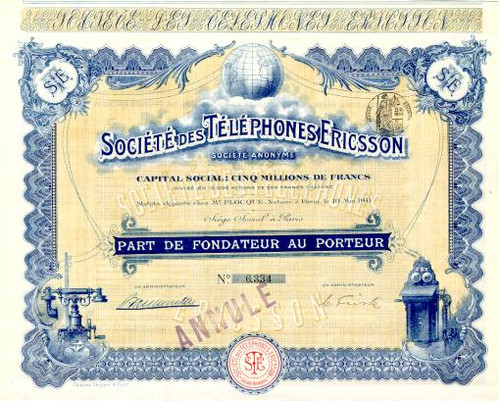 Beautiful certificate from the Societe des Telephones Ericsson issued in 1911. This historic document has an ornate border around it with a vignettes of early telephones This item is hand signed by the company's administrators and is over 98 years old. 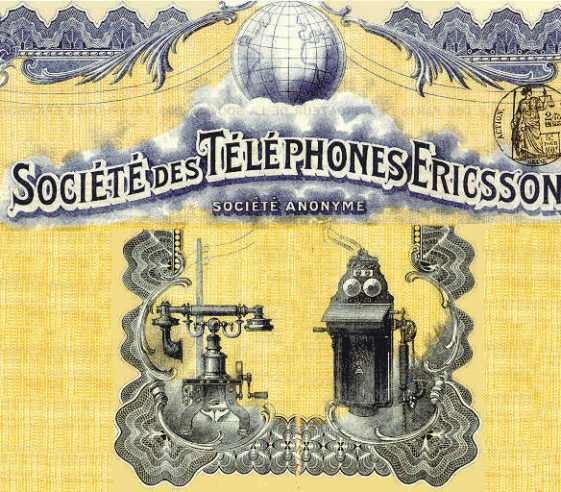 Certificate Vignette
The company's history dates back to 1876 when the founder, Lars Magnus Ericsson, opened a repair shop for telegraph equipment. Realizing that there was a need for improvements in the telephone instruments available at that time, he started his own production. Ericsson's first major product to be launched internationally, in 1892, was a desk instrument with a separate hand-held microphone. Since then, the company has been one of the world's leading manufacturers of advanced telephone equipment, with a very high percentage of its sales outside Sweden. As early as the late 1890s, Ericsson had operations worldwide - including countries such as China, Russia and Mexico. The company's executive management already realized that the Swedish domestic market would never be large enough to fulfill Ericsson's business objectives. This foresight explains why Ericsson today has a very strong international base, with operations in more than 130 countries. This global presence enables the company to acquire unique knowledge about market conditions in all parts of the world. Based on this knowledge and on the company's high level of technical expertise, Ericsson develops telecommunications solutions for customers worldwide. Ericsson is a now a world-leading supplier in telecommunications. It produces advanced systems and products for wired and mobile telecom systems in private and public networks. Since the end of the 19th century, Ericsson has been active worldwide and today, with its strong international presence in more than 130 countries, Ericsson has unique knowledge of market conditions in all parts of the world. Ericsson has developed the world's largest customer base in telecommunications, with customers on all continents. Compared with most of its major competitors (Alcatel, Lucent, Motorola, Nokia, Nortel, Siemens and others), Ericsson has by far the highest percentage of international sales. In times when a region is hit by an economic slowdown, a broad international distribution of sales is an enormous strength. Ericsson has always concentrated intensively on technical development. Annual investments in technical development in recent years have amounted to about 15-20 percent of sales. More than 22,000 employees in 23 countries are active in research and development. Among other factors, these investments are the main reason why Ericsson is a market leader in the field of mobile telephone systems, with a world market share of close to 40 percent. Ericsson's research and development focuses on products and systems in its core business. The company's strategy in a number of important areas is to form joint ventures with other leading companies. IBM, Intel, Marconi, Microsoft, Novell, Sun and Texas Instruments are examples of companies with which Ericsson cooperates in specific areas of technology. Ericsson's product line is broader than the range offered by any competitor. AXE, the digital switching system for wired and mobile networks, is the world's most successful telecom system. Today, it is installed in 125 countries. Due to its flexibility and adaptability, the system is used in all types of applications, in fixed and mobile networks. Some 65 million mobile subscribers were added during 1997, an increase of 48 percent. Of today's 201 million subscribers, 75 million initiate calls in networks delivered by Ericsson. The growth in mobile systems will continue and it is expected that there will be nearly 600 million subscribers by year-end 2001. Ericsson is the world's largest supplier of the GSM and D-AMPS digital mobile telecom systems and the second largest supplier of the Japanese PDC digital system. During 1997, it is estimated that 100 million mobile telephones were sold. Most of these were for digital systems. It is projected that the sharp rise seen in recent years in this market will continue. Ericsson offers a extensive range of phones for analog and digital systems and is one of the leading manufacturers of mobile telephones.