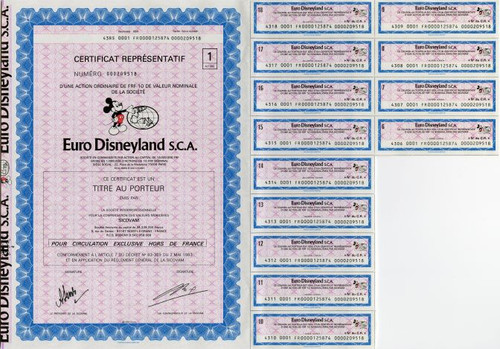 Beautifully engraved uncancelled certificate from the Euro Disneyland issued in 1983. Euro Disney had substantial financial problems after these certificates were issued, but the banks were able to restructure their arrangements with Euro Disney and the rest is history. They have subsequently changed their name to Paris Disneyland The reverse of these bonds are written in French, German and English. The certificate has an ornate blue border with a vignette of Mickey Mouse pointing towards a Globe of the World. Unused coupons attached on right side.

Certificate Vignette
Disneyland Paris Disneyland Paris is a holiday and recreation resort in Marne-la-VallÃ©e, a new town in the eastern suburbs of Paris, France. The complex is located 32 km (20 mi) from the centre of Paris and lies for the most part within the commune of Chessy, Seine-et-Marne. Disneyland Paris is composed of two theme parks, a retail, dining and entertainment district, and seven Disney-owned hotels. Operating since 12 April 1992, it was the second Disney resort to open outside the United States (following Tokyo Disney Resort) and the first to be owned and operated by Disney. Disneyland Paris is operated by French company Euro Disney S.C.A., a public company of which 39.78 percent of its stock is held by The Walt Disney Company, 10 percent by the Saudi Prince Alwaleed and 50.22 percent by other shareholders. The senior leader at the resort is chairman and CEO Philippe Gas. The complex was a subject of controversy during the periods of negotiation and construction in the late 1980s and early '90s, when a number of prominent French figures voiced their opposition and protests were held by French labour unions and others. A further setback followed the opening of the resort as park attendance, hotel occupancy and revenues fell below projections. The complex was renamed from Euro Disney Resort to Disneyland Paris in 1994. In July 1995, the company saw its first quarterly profit. A second theme park, Walt Disney Studios Park, opened to the public 16 March 2002. With 15,405,000 combined visitors to the resort's Disneyland Park and Walt Disney Studios Park in the fiscal year of 2009, it is France's and Europe's most visited themed attraction. History from Wikipedia and OldCompany.com (old stock certificate research service).