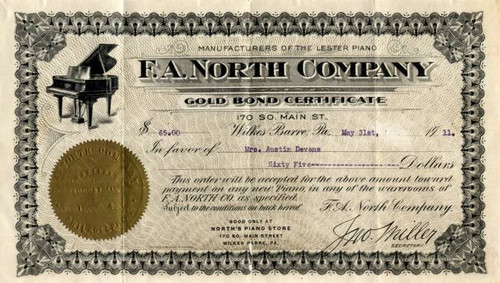 Beautiful $50 Gold Bond Certificate from the E. A. North Company issued in 1900. This historic document has an ornate border around it with a vignette of a piano. This item has the printed signature of the Company's Secretary, and is over 113 years old.

Certificate Vignette
F. A. NORTH COMPANY was incorporated on August 11, 1904. Capital, $150,000. Manufactured the Lester Piano and dealing in organs, musical instruments, sheet music and all other articles and appliances connected with the music business. The Lester Piano Company was a hallmark of the American piano industry during what is now referred to as the Golden Age of piano building. During the last quarter of the nineteenth century up until the early 1930s, pianos become increasingly commonplace in American homes. Lester built a range of pianos under several name brands, including Lawrence, Gounod, Channing, Alden, Bellaire, Schubert and Leonard. The company insisted that every Lester piano was built to tolerate the same musicality and at its height, the Lester grand piano was the preferred choice for auditoriums, concert halls, conservatories and schools and homes alike. Lester's earliest models, those produced before the 1930s, had a reputation of being of exceptional build quality and produced a full toned and sweet sound. Even in the high register, Lester pianos were noted for not producing a tin-like sound which distinguished them from their cheaper counterparts. Accordingly, many famous pianists and American musicians, such as Alice Nielsen and Franz Kneisel used Lester pianos. The most famous of all the Lester Piano Company's products is unquestionably their Betsy Ross spinet, a small upright piano that was manufactured around the 1930s. The huge success of this piano is often credited as saving the Lester Piano Company from financial bankruptcy during the Great Depression, which was a time when the majority of other American piano manufacturers were forced to close. After over eight decades, the Lester Piano Company eventually closed shop in 1960.