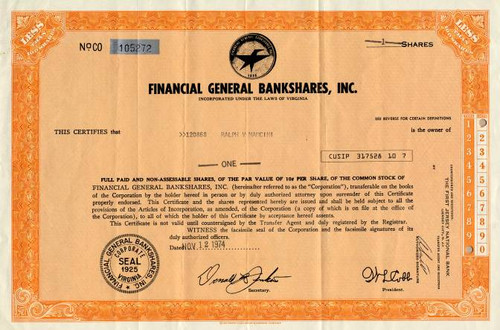 Beautiful uncancelled stock certificate from the Financial General Bankshares Company printed in 1974. This historic document was printed by the Security-Columbian Banknote Company and has an ornate border around it with a vignette of the company logo. This item has the printed signatures of the Company's President, and Secretary, and is over 38 years old.

Certificate Vignette
In 1982, 15 Middle Eastern investors bought Financial General Bankshares, a large bank holding company headquartered in Washington, D.C. All the investors were BCCI clients, but the Fed received assurances that BCCI would be in no way involved in the management of the company, which was renamed First American Bankshares. To alleviate regulators' concerns, Clark Clifford, an adviser to five presidents, was named First American's chairman. Clifford headed a board composed of himself and several other distinguished American citizens, including former United States Senator Stuart Symington. In truth, BCCI had been involved in the purchase of FGB/First American from the beginning. Abedi had been approached about buying it as early as 1977, but by this time BCCI's reputation in the United States was so poor that it could not hope to buy an American bank on its own (as mentioned above, the OCC was adamantly opposed to BCCI being allowed to buy its way into the American banking industry). Rather, it used the First American investors as nominees. Moreover, Clifford's law firm was retained as general counsel, and also handled most of BCCI's American legal work. BCCI was also heavily involved in First American personnel matters. The relationship between the two was so close that rumors spread BCCI was the real owner of First American. History from Wikipedia and OldCompany.com (old stock certificate research service)