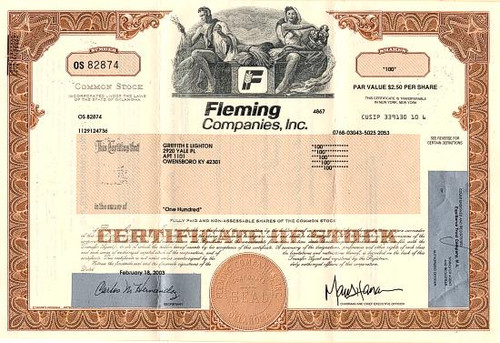 Beautiful certificate from the Fleming Companies, Inc issued in 2003. This historic document was printed by Security-Columbian Bank Note Company and has an ornate border around it with a vignette of an allegorical man and woman. This item has the printed signatures of the Company's President and Secretary. 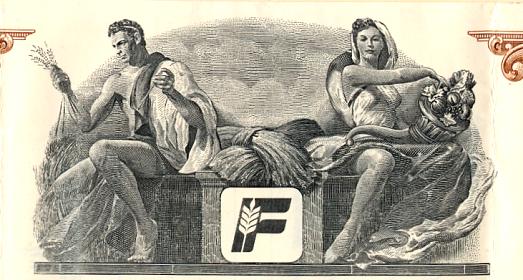 Certificate Vignette
Fleming Cos was founded as Lux Mercantile in Topeka, Kansas in 1915 by O.A. Fleming, Gene Wilson and Samuel Lux. In 1941, the company name was changed to The Fleming Company, and Ned Fleming was named President, Chairman, and CEO. The company's IPO occurred in 1959, when 100,000 shares were offered. In 1981, R.D. Harrsion was elected Chairman and CEO of the company, with Dean Werries serving as President and COO. Fleming Cos grew to become the nation's largest supplier of consumer package goods to U.S. retailers, serving approximately 50,000 retail locations. These locations included supermarkets such as IGA, convenience stores, supercenters, discount stores, concessions, limited assortment, drug, specialty, casinos, gift shops, military commissaries and exchanges and others. The company later moved its headquarters to Oklahoma City, Oklahoma in 1984 and then to Lewisville, Texas in 2000. History from Wikipedia and OldCompanyResearch.com (old stock certificate research service).