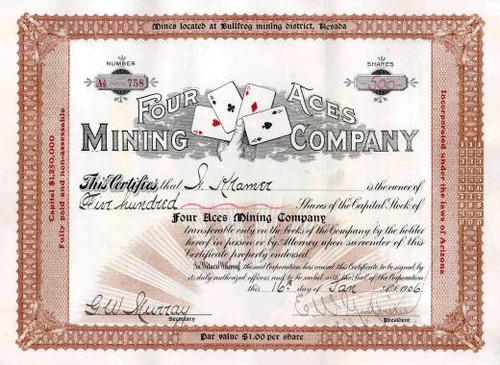 Beautiful and hard to find stock certificate from the Four Aces Mining Company issued in 1906. This historic document has an ornate border around it with a classic vignette of a hand holding four aces. This item is hand signed by the Company's President and Secretary and is over 108 years old.

Certificate Vignette
In the early days of the Bullfrog Gold Rush, the Four Aces Mine was located near the Mayflower in Pioneer. The claims were originally discovered in October of 1904, but the paperwork wasn't filed until April 20, 1905. This stock was issued and sold on the stock exchanges in Rhyolite and across the country, but the mine never produced much gold......other than these stock certificates that are treasured by collectors. This is one of the all time classics.