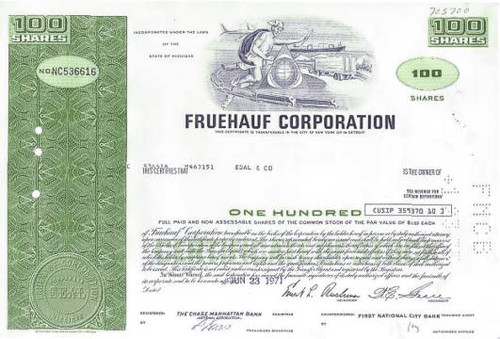 Beautifully engraved Certificate from the Fruehauf Corporation Stock issued from 1968 - 1975. This historic document was printed by the Security Columbian Banknote Company and has an ornate block border with a vignette of Mecury with a plane, train, ship and truck. This item has the printed signatures of the company's officers and is over 26 years old. 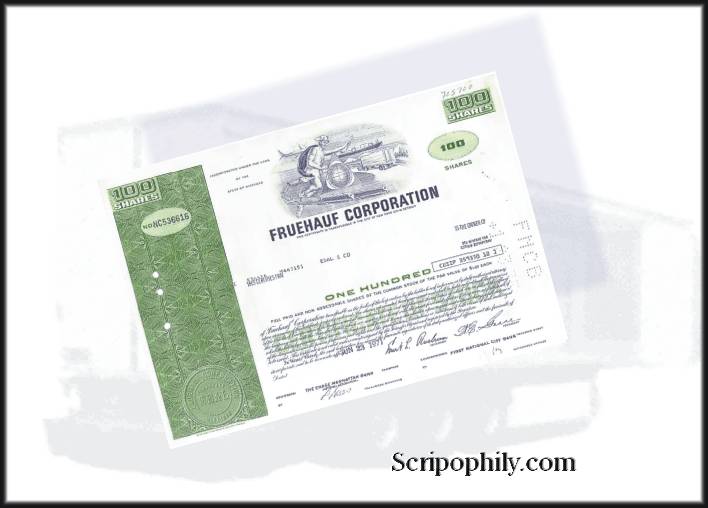 Certificate Vignette
Fruehauf Corporation was an American corporation engaged in the manufacture and sale of truck trailers and their headquarters were located in Indianapolis, Ind., The founder, August Charles Fruehauf (1868-1930), began as a blacksmith and carriage builder around Detroit. In 1914, at the request of a local lumber merchant, he built a trailer to carry the merchant's pleasure boat, to be hauled by a Ford automobile. The trailer was so successful that the merchant had Fruehauf build similar haulers for his lumber, which Fruehauf came to call "semi-trailers." Business boomed, and four years later, in 1918, Fruehauf incorporated the Fruehauf Trailer Company. Over the next few decades the company prospered and introduced several new concepts in trailer design and size--first under the founder and then under his son Harvey Charles Fruehauf (1896-1968)