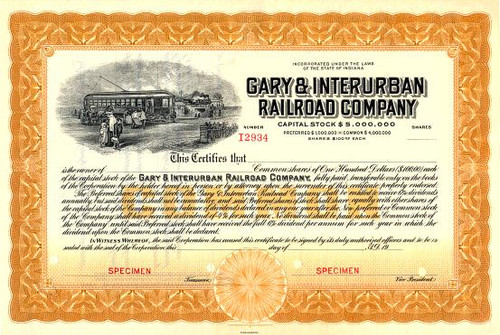 Beautifully engraved specimen certificate from Gary & Interurban Railroad Company printed around 1905. This historic document was printed by Western Bank Note Company and has an ornate border around it with a vignette of an old railroad car. This item is over 101 years old.

Certificate Vignette
The Gary and Interurban Railroad was the result of two facets of American entrepreneurship. The first facet was the founding in 1906 of the town of Gary, Indiana, as the home of three major plants of the United States Steel Corporation (headed by Judge Elbert H. Gary). Construction of an entire steel works, as well as a tin plate mill and a bridge plant, began in 1906 and was completed in 1911. The founding of Gary coincided with a boom in electric interurban railroads, which found an especially hospitable terrain in the flat farm land of northern Indiana. The first interurban line based in Gary (1906) had the ambitious title of the Chicago-New York Electric Air Line Railroad, but succeeded only in building a total of twenty miles of track centered in LaPorte. In 1907 Frank N. Gavit incorporated the Gary and Interurban Railway, with the intent of running streetcars in Gary and interurban service west to Tolleston and Hammond. Service to Hammond opened in 1909 (with a car purchased from another company with big ideas, the Denver and Intermountain Railway). The company paid regular dividends. In 1911 Air Line stockholders began a movement to purchase the Gary and Interurban. As a result a new company was formed in 1913, the Gary and Interurban Railroad Company. Floated mainly by selling 4 per cent bonds, the new company consolidated lines to South Bend and Valparaiso, extended its lines in Gary, and owned and leased out the street railways in East Chicago. It had 37 passenger cars and six freight cars, operating on 79.3 miles of track. In 1914 it carried 5,525,770 passengers and logged 57,386 freight miles. However, the company was soon in trouble, partly from over-capitalization, partly because its franchise restricted its fares (3 cents, or ten fares for a quarter), partly because of competition from jitney cabs. The company failed to make interest payments in December 1914, and the following month defaulted on all obligations. It attempted unsuccessfully to raise funds by assessing its stockholders. In October 1915 a receiver was appointed. Two years later the company was split back into its original parts. Operations in Gary were taken over by the Gary Street Railway, and the Gary and Interurban continued to provide service to Hammond. About Specimens Specimen Certificates are actual certificates that have never been issued. They were usually kept by the printers in their permanent archives as their only example of a particular certificate. Sometimes you will see a hand stamp on the certificate that says "Do not remove from file". Specimens were also used to show prospective clients different types of certificate designs that were available. Specimen certificates are usually much scarcer than issued certificates. In fact, many times they are the only way to get a certificate for a particular company because the issued certificates were redeemed and destroyed. In a few instances, Specimen certificates we made for a company but were never used because a different design was chosen by the company. These certificates are normally stamped "Specimen" or they have small holes spelling the word specimen. Most of the time they don't have a serial number, or they have a serial number of 00000. This is an exciting sector of the hobby that grown in popularity over the past several years.