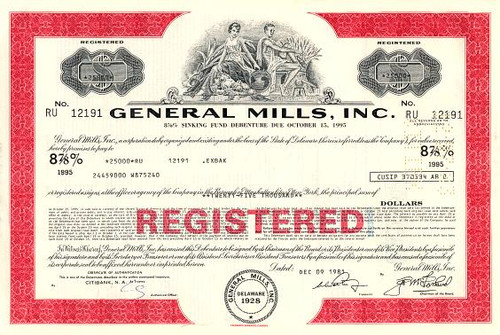 Beautiful certificate from the General Mills issued in 1981. This historic document was printed by Federated Banknote Company and has an ornate border around it with a vignette of an allegorical man and woman. This item has the signatures of the Company's President and Secretary and is over 26 years old. 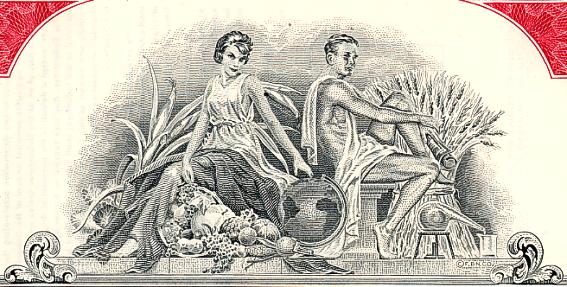 Certificate Vignette
General Mills (NYSE: GIS) is a Fortune 500 corporation, mainly concerned with food products, which is headquartered in Golden Valley, Minnesota, a suburb of Minneapolis. The company markets such brands as Betty Crocker, Progresso, Yoplait, Old El Paso, and Pillsbury, as well as numerous well-known breakfast cereals. The company can trace its history to the Minneapolis Milling Company, an organization founded in 1866 by Cadwallader C. Washburn which leased power rights to mills operating along Saint Anthony Falls on the Mississippi River. His brother William D. Washburn also assisted in the company's development. In 1866, the Washburns got into the business themselves, building the Washburn "B" Mill at the falls. At the time, the building was considered to be so large and output so vast that it could not possibly sustain itself. However, the company succeeded and in 1874 he built the even bigger Washburn "A" Mill. In 1877, the mill entered a partnership with John Crosby to form the Washburn-Crosby Company. A year later, the "A" mill exploded, killing 17 workers and also demolishing several nearby buildings. The mill was rebuilt and continued to operate for several decades. In the 1920s, the company stepped in to take over a failing Twin Cities radio station, renaming it WCCO. General Mills was created in 1928 when Washburn-Crosby President James Ford Bell directed his company to merge with 26 other mills. During the 1960s, retired USAF General Edwin W. Rawlings helped transform this firm from a family-led firm to a business that effectively exercises corporate social responsibility as a core value. In 1970, General Mills acquired a five-unit restaurant company called Red Lobster and expanded it nationwide. Soon, a division of General Mills titled General Mills Restaurants developed to take charge of the Red Lobster Chain. In 1982, General Mills Restaurants founded a new Italian themed restaurant chain called Olive Garden. General Mills spun off its Restaurant division in 1995 into Darden Restaurants. In 1988, General Mills sold General Mills Specialty Retail Group, which was the parent company of both Eddie Bauer (sold to Spiegel, Inc.) and Talbots. In 1990, General Mills and NestlÃ© started a 50/50 joint venture called Cereal Partners Worldwide to market breakfast cereals for both the United States and Europe. CPW distributes cereals manufactured by both companies under the NestlÃ© brand name. In 2001, the company purchased Pillsbury, although it was officially described as a "merger." However, Diageo still stands strong without Pillsbury. In October of 2004, the General Mills monster-themed triple pack breakfast cereals were introduced in supermarkets and wholesale retail stores, featuring Boo Berry (blueberry-flavoured), Count Chocula (chocolate-flavoured), and Franken Berry (strawberry-flavoured). In late 2004, the company transitioned its entire breakfast cereal line to whole grain due to scientific research showing the positive impact consuming whole grains has on individuals' health. Also, in 2004, General Mills was named one of the 100 Best Companies for Working Mothers by Working Mothers magazine. History from Wikipeida and OldCompanyResearch.com.