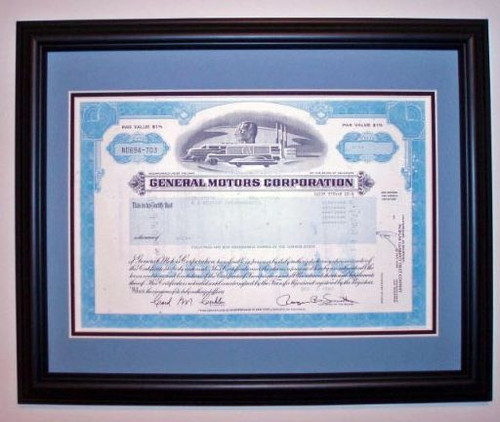 This contemporary, black frame is 1" wide with an overall size of 12 3/4" x 15 3/4". The 1970-80s modern General Motors blue stock certificate is framed with a double mat as shown in the illustration. Archival mounting, acid free backing and clear glass are used in preparing the framed certificate. Our sales price includes the historic General Motors Corp. stock certificate, packaging and USPS Priority shipment within the continental U.S. Beautiful certificate from the General Motors Corporation issued prior to 1990. This historic document was printed by American Banknote Company and has an ornate border around it with a vignette of men with futuristic GM products. This item has the signatures of the Company's President and Secretary.