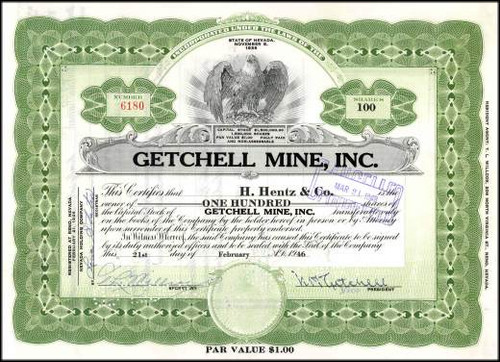 Beautifully engraved certificate from the Getchell Mine, Inc. issued in 1949. This historic document was printed by the American Banknote Company and has an ornate border around it with a vignette of an eagle. This item is hand signed by the Company's Vice President ( Noble Getchell ) and Secretary and is over 54 years old. 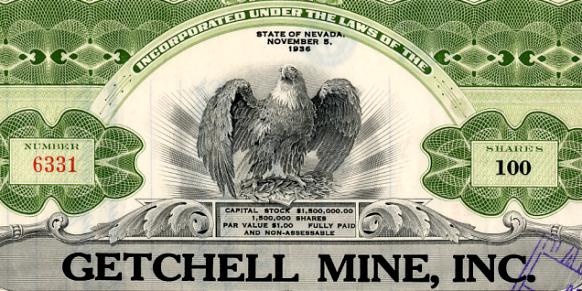 Certificate Vignette
GETCHELL MINE Discovered in 1933 and quickly purchased by Noble Getchell. Quickly became a huge operation with a 400-ton mill and a company town with almost a hundred homes. The mine produced copper, silver, arsenic, tungsten and gold. On May 27, 1999 Placer Dome completed a merger with Getchell Gold Corporation, resulting in Placer Dome owning 100% of the Getchell gold property. Getchell is an underground gold mine located in the Potosi Mining District, Humboldt County, Nevada The Getchell Mine has produced more than $60 million and counting making it one of the richest districts in Nevada. On October 25, 2001, Newmont Mining Corporation and Getchell Gold Corporation signed a letter of intent under which Newmont will buy ore from the Getchell mine for processing at Newmont's adjacent Twin Creeks mine. Getchell is 100% owned by Placer Dome