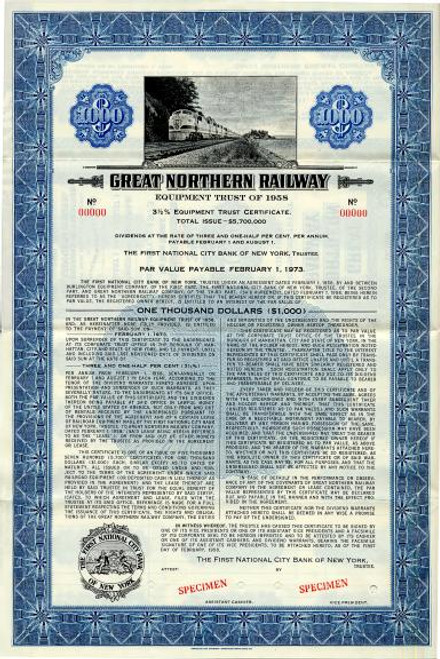 Beautifully engraved specimen certificate from the Great Northern Railway Equipment Trust dated 1958. This historic document was printed by American Bank Note Company and has an ornate border around it with a vignette of a diesel train cruising down the track. This item is over 48 years old. 30 Dividend Coupons attached on right. 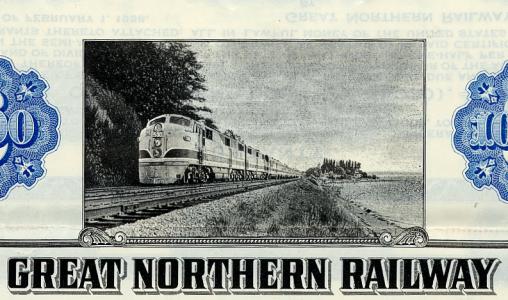 Certificate Vignette
Equipment Trusts by Terry Cox The first bond that mentioned "equipment" was issued in 1862. From then until the turn of the century, equipment bonds were pretty much normal bonds. The idea was to borrow money from investors to buy equipment and then use that equipment as collateral. In practice, the situation was like modern individuals using banks' money to buy cars. Like automobiles, equipment is expendable and does not last long. Moreover, equipment like locomotives, lasted longer than wood sided coal cars or gondolas for hauling scrap iron. Apparently in response, railroads started selling different kinds of equipment bonds with different interest rates and terms. Unlike private autos, though, most rail equipment moves around and is seldom used by only one company. In fact, rail cars may move for months, even years, without coming back to the rail system that owns them. Companies will use other companies' equipment and pay time- and mileage-based rental fees. In that respect, equipment ownership tends to be an equipment leasing business. "Equipment trusts" started appearing around 1907 as companies began separating ownership of equipment from the rest of their rail operations. While trust certificates look like typical vertical format bonds, a close reading of the text suggests they acted more like hybrids between stocks and bonds. This is especially true with recent trust certificates. Like normal bonds, most equipment trust certificates are issued in $1000 denominations. However, many are labeled as "shares of $1000." Coupons were often attached, and in the early years, certificates plainly stated that coupons were exchangeable for interest payments. Later certificates, however, say that the coupons represent dividend payments. Look carefully at most equipment trusts and you will see that they are labeled with railroad names without the word "company." This is because the equipment is not actually owned by the railroad, but by the trust. The trust, in turn, is commonly administered by a large New York-based bank or trust institution. It is always a little hard to decipher the exact intent, but in general, equipment trust certificates represent ownership of equipment that is leased to specific railroads. The modern-day equivalent is the trend of people leasing their family automobiles from banks or manufacturers. Since large companies are in the business of leasing equipment, they gain tax benefits in the form of depreciation. From a cataloger's standpoint, I have concluded that most trusts were entities separate from railroad companies, Consequently, most (but certainly not all) equipment trusts will appear in the next edition as separate companies. Since the last newsletter, three or four major contributors sent me probably 30-40 new trust certificates. Some were tough to describe because they vary so minimally from each other. The most obvious way to differentiate between equipment trust certificates are with series designations. They are usually lettered from A to Z, then AA to ZZ. I have not even come close to cataloging a complete series from any company. Large companies issued many different trusts.So far, the best represented are the Southern and the L&N, both with 15 certificates apiece. I'm betting that the Southern issued at least 20 trusts. There is compelling evidence that the L&N issued at least 63 different series!! Different series were generally, but not always, issued chronologically. For instance Series C certificates were usually issued after, or at the same time as, Series B certificates. However, series normally varied by redemption dates, interest rates, or both. About Specimens Specimen Certificates are actual certificates that have never been issued. They were usually kept by the printers in their permanent archives as their only example of a particular certificate. Sometimes you will see a hand stamp on the certificate that says "Do not remove from file". Specimens were also used to show prospective clients different types of certificate designs that were available. Specimen certificates are usually much scarcer than issued certificates. In fact, many times they are the only way to get a certificate for a particular company because the issued certificates were redeemed and destroyed. In a few instances, Specimen certificates we made for a company but were never used because a different design was chosen by the company. These certificates are normally stamped "Specimen" or they have small holes spelling the word specimen. Most of the time they don't have a serial number, or they have a serial number of 00000. This is an exciting sector of the hobby that grown in popularity over the past several years.