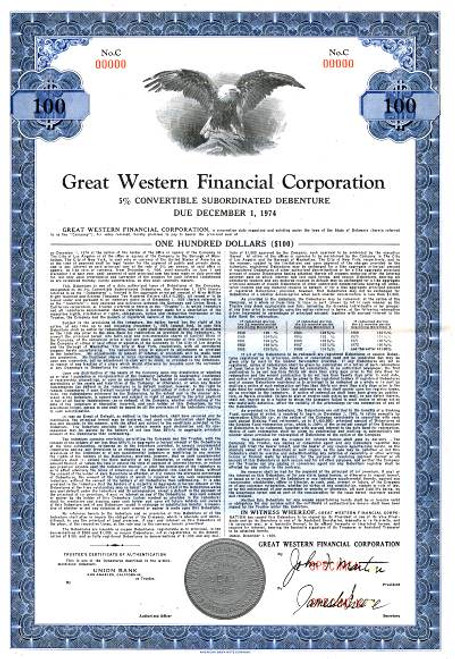 Beautifully engraved Specimen Certificate from Great Western Financial Corporation dated 1959. This historic document was printed by the American Banknote Company and has an ornate border around it with a vignette of an eagle. This item has the printed signatures of the Company's President ( John Maher ) and Secretary and is over 46 years old.

Certificate Vignette
Great Western Financial offered traditional thrift products -- savings accounts, CDs, and mortgage loans -- as well as checking accounts, credit cards, asset management, investment advice, mutual funds (through its Sierra Trust funds), consumer finance, and insurance sales. Washington Mutual's $6.8 billion purchase of the Chatsworth, California-based firm was completed in 1997. Great Western's last reported sales were $3.6 billion in 1996. Great Western was founded as an S&L in California in 1919. In 1955 it was merged into a holding company, Great Western Financial Corp. Within five years it acquired Santa Ana Savings (1956), West Coast Savings (Sacramento, 1957), Guaranty Savings (San Jose, 1958), Central Savings (San Luis Obispo, 1959), and First Savings (Oakland, 1959). The company later bought Santa Rosa Savings (1968) and Safety Savings (Los Angeles, 1969). After purchasing four more California S&Ls in 1970 and 1971, Great Western Financial combined them all into Great Western Savings in 1972. In 1994 operations were particularly affected by the Northridge earthquake because the company had an administration center there. That year's profits, however, quadrupled, thanks to the necessity for lower loss reserves and the gain on the sale of its 31 branches on Florida's Gulf Coast. The next year chairman Montgomery passed the office of CEO to president John Maher, who accelerated the drive toward banking services. In 1996 the company announced a $115 million restructuring program that would eliminate 800 jobs, consolidate mortgage banking branches, and install new technology. In late 1996 Great Western sold its student loan business to Crestar Bank. In early 1997 California thrift H.F. Ahmanson launched a hostile takeover bid for the company, but Washington Mutual's friendly offer won out later that year. About Specimen Certificates Specimen Certificates are actual certificates that have never been issued. They were usually kept by the printers in their permanent archives as their only example of a particular certificate. Sometimes you will see a hand stamp on the certificate that says "Do not remove from file". Specimens were also used to show prospective clients different types of certificate designs that were available. Specimen certificates are usually much scarcer than issued certificates. In fact, many times they are the only way to get a certificate for a particular company because the issued certificates were redeemed and destroyed. In a few instances, Specimen certificates were made for a company but were never used because a different design was chosen by the company. These certificates are normally stamped "Specimen" or they have small holes spelling the word specimen. Most of the time they don't have a serial number, or they have a serial number of 00000. This is an exciting sector of the hobby that has grown in popularity over the past several years.