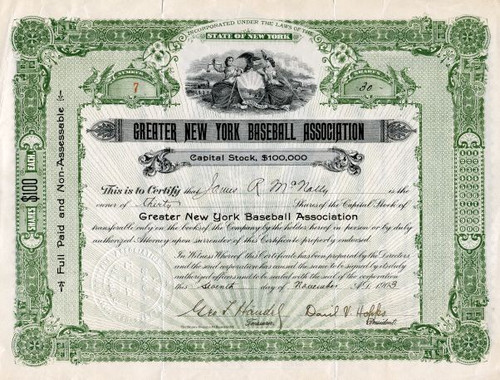 Beautifully engraved certificate #7 from the Greater New York Baseball Association issued in 1903 during the franchises inaugural year. This historic document was printed by the Broun Green Company and has an ornate border around it with a vignette of allegorical women leaning on a shield with an eagle on top of it. This item has the signatures of the Company's President and Secretary and is over 102 years old. This is the first time we have had an issued certificate from this company for sale and believe it is quite rare.

Certificate Vignette
The company was authorized for $100,000 of capital stock for shares of $100 each. New York Yankees - The Highlanders - The franchise's first park in New York was located at 165th St. and Broadway in Manhattan located near the highest point on the island. Consequently the field was known as Hilltop Park Hilltop Park and the team became known as the New York Highlanders. As the Highlanders the team enjoyed success only twice, finishing in second place in the American League in 1904 and 1910, but otherwise much of the next fifteen years was spent in the cellar. From 1913 to 1922 the team would play in the Polo Grounds a park owned by their National League rivals, the Giants. With the change of parks in 1913, the team also officially changed its name to New York Yankees, a name which had been in informal but increasing use for the prior few years. Jan 9, 1903 - Frank Farrell and Bill Devery purchase the Baltimore franchise of American League and move team to New York. Mar 12, 1903 - New York Highlanders were approved as members of the American League. Apr, 1913 The Highlanders are officially renamed the "Yankees" after moving to the Polo Grounds, home of the National League's New York Giants. Jan 11, 1915 Col. Jacob Ruppert and Col. Tillinghast L´Hommedieu Huston purchase the Yankees for $460,000. Apr 24, 1917 George Mogridge becomes the first Yankee to throw a no-hitter in a 2-1 win at Fenway Park. Jan 3, 1920 The Yankees purchase the contract of Babe Ruth from the Boston Red Sox for $125,000 and a $350,000 loan against the mortgage on Fenway Park. Sept, 1921 The Yankees clinch the first of their 37 A.L. pennants. May 5, 1922 Construction begins on Yankee Stadium. May 21, 1922 Col. Ruppert buys out Col. Huston for $1,500,000. Apr 18, 1923 - Yankee Stadium opens. Ruth hits home run.