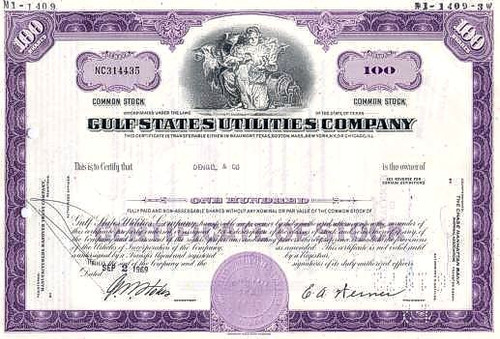 Beautifully engraved Certificate from the Gulf States Utilities issued in the 1960's. This historic document was printed by the American Banknote Company and has an ornate border around it with a vignette of an allegorical woman and baby looking at light in front of an electric generator. This item has the printed signature of the company president and is over 36 years old. Gulf States Utilities (GSU) was an electric power generation and distribution company headquartered in Beaumont, Texas. The company supplied electricity in parts of southeastern Texas and southwestern Louisiana.The company was founded in 1911 as Eastern Texas Electric, a holding company for Stone and Webster. On August 25, 1925, Gulf States Utilities Company was incorporated in the state of Texas. The company grow, and in 1979 moved its headquarters into the Edison Plaza office tower, which is still the tallest building in Beaumont (as of 2004). Also in the late 1970s, construction began on the River Bend Station nuclear power plant. Cost overruns on the nuclear plant and a downturn in the regional economy in the mid 1980s nearly drove GSU into bankruptcy. GSU was absorbed by Entergy Corporation in 1993. At the time, GSU had 578,000 customers across southern Louisiana and East Texas. Edison Plaza is used by Entergy as a regional headquarters. The River Bend Station continued to be a thorn in the side of its new owners due to lawsuits by the project's investors and fines levied by the Nuclear Regulatory Commission over safety problems at the plant.