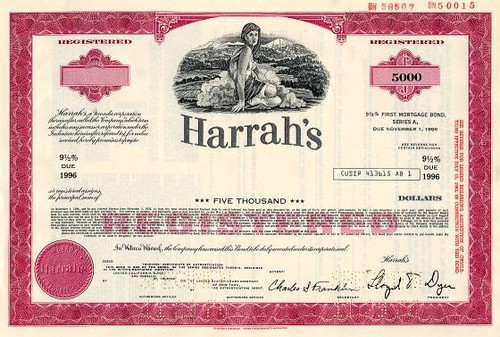 Beautiful engraved specimen certificate from the Harrah's . This historic document was printed by United States Banknote Company and has an ornate border around it with a vignette of an allegorical woman. This item has the printed signatures of the Company's President and Secretary. 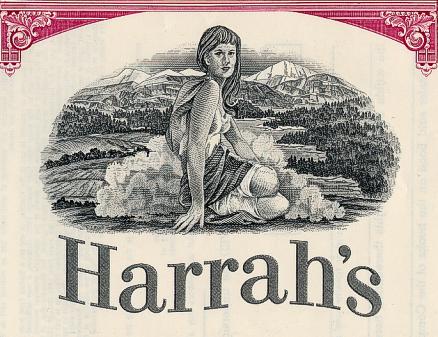 Certificate Vignette
Harrah's is a hotel and casino located in Stateline, Nevada. It is branded with the name of its former owner William F. Harrah and owned by Caesars Entertainment Corporation. The 18-story tower and 525 rooms, plus 65,000 sq ft (6,000 m2) of casino make it one of the largest resorts at South Lake Tahoe. Harrah's was first established in Lake Tahoe when William F. Harrah purchased George's Gateway Club in January 1955 for $500,000 and Harrah's Lake Club opened on June 20, 1955, which it is now Harveys Lake Tahoe. In 1956, Harrah's Lake Club was sold for $5,250,000 in cash to Harvey Gross, which at the time was the most expensive casino purchase ever. In 1958 Harrah acquired an interest in the Stateline Country Club and Nevada Club across the street (Harrah's current location) and opened Harrah's Stateline Club. Also in 1956, a new radio station, KOWL, had its original radio studio inside the Harrah's Stateline Club. They were located on the upper floor. The station's transmitter and broadcast tower were roughly two miles south of the casino in South Lake Tahoe, California. The South Shore Room opened at Harrah's Tahoe in 1959, at a cost of $3.5 million. This 750-seat showroom, whose opening act was comedian Red Skelton, made entertainment a priority at Harrah's. In 1963, Barry Keenan, Joseph Amsler and John Irwin abducted Frank Sinatra, Jr., the 19-year-old son of singer Frank Sinatra, after his performance at the South Shore Room opening for George Jessel. Portions of the Bette Midler film Jinxed! were shot on location at the hotel in summer 1981 for the summer 1982 release of the film. Other locations used in the film were Harrah's in Reno and the Harrah's Auto Museum also in Reno. Harrah had been planning to build a hotel at Lake Tahoe for many years, but had been hindered by costs. However in 1971, when Harrah's went public, he finally had the finances available to build his dream hotel. In 1972, Harrah broke ground on his $25-million, 18-story, 250-room hotel which opened on November 9, 1973. Each 500 sq ft (46 m2) room was furnished with a fully stocked bar, bay windows, 2 bathrooms with TVs and telephones. It earned the first five-star diamond rating in casino history. The hotel was later expanded with 290 additional rooms in 1976. In 2000, It completed a $26 million renovation to update the casino, hotel rooms and restaurants on the 18th floor including the Forest Buffet and Friday's Station. On December 3, 2005, a shootout occurred in a private booth near the casino floor. One person was killed, and two Douglas County Sheriff's Deputies were injured. Caesars Entertainment Corp began a major effort to remodel and revitalize Harrah's Lake Tahoe beginning in 2005, they remodeled floors 12 to 15 of the hotel and remade the rooms in mini suites with large couches, dry bars and brand new decor and furniture. The remodel was completed in mid-2006. Following the hotel remodel, Caesars completely remodeled the hotel's lobby and added a food court and luxury diamond outlet signature to Caesars called "Park Place Jewelers" in 2007. In 2008, Caesars added an upscale, luxury Chinese/Cantonese restaurant called "Gi Fu Loh" to cater to their Asian customers. Efforts to renovate have made Harrah's Lake Tahoe the hotel to be at and is ranked as classiest out of the four casinos in Stateline. There is access to Harveys via an underground pathway that features an arcade and Sammy Hagar's CaboWabo and features live acts. It is also owned by the Caesars Entertainment Corporation. History from OldCompany.com, Wikipedia and SavingsBonds.pro (collectible Savings Bonds website) About Specimens Specimen Certificates are actual certificates that have never been issued. They were usually kept by the printers in their permanent archives as their only example of a particular certificate. Sometimes you will see a hand stamp on the certificate that says "Do not remove from file". Specimens were also used to show prospective clients different types of certificate designs that were available. Specimen certificates are usually much scarcer than issued certificates. In fact, many times they are the only way to get a certificate for a particular company because the issued certificates were redeemed and destroyed. In a few instances, Specimen certificates we made for a company but were never used because a different design was chosen by the company. These certificates are normally stamped "Specimen" or they have small holes spelling the word specimen. Most of the time they don't have a serial number, or they have a serial number of 00000. This is an exciting sector of the hobby that grown in popularity over the past several years.