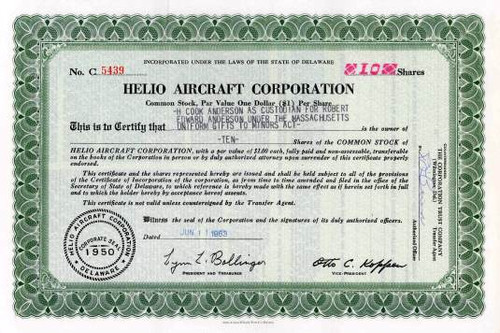 Beautifully engraved RARE certificate from the Helio Aircraft Corporation issued in 1963. This historic document was printed by the John A. Lowell Banknote Company and has an ornate border around it. This item has the printed signatures of the Company's President ( Dr. Lynn Bollinger ) and Vice President ( Otto Koppen ) and is over 40 years old. this si the first time we have seen this company's certificate. This Helio Aircraft Corporation was formed in 1950 with the merger of Helio Corporation of Massachusetts and Midwest Aircraft Corporation. In 1948, Helio began research and development of an advanced executive aircraft that would provide for ultra-short field operation while having the attributes of a normal plane. The plane design was certified by the Civil Aeronautics Administration in August of 1953. In June of 1954, the first two Couriers were accepted as conforming to standard type and were delivered to private purchasers. In 1956, the company merged with Mid-States Manufacturing Corporation of Pittsburgh, Kansas. The Canton location was then primarily research and development with some limited amounts of construction. It employed about 46 people in Canton and remained here until 1964 when it moved to Bedford Airport. Helio's first plane manufactured in Canton went into the Smithsonian Institute in Washington in October of 1963. In the late 1940s, Otto Koppen of the Aeronautical Engineering faculty at MIT and Dr. Lynn Bollinger of the prestigious Harvard Business School developed the first Helioplane experimental prototype, a short take off and landing (STOL) light aircraft. The two college professors noted the precipitous drop-off of the earlier high demand for light airplanes in the immediate post war years and determined that the market for the standard light planes that required a normal airport had been grossly overestimated. The two professors correctly assessed that a major part of the problem was the unfulfilled postwar promise of an airplane in every garage. While they were not necessarily pushing for the personal garage concept, they did feel that the ability to land in your own back yard, providing you had a big one, was an achievable goal. Thus they conceived the idea of an inexpensive STOL light airplane that was controllable at very low flight speeds. Professor Koppen was not a newcomer to the so-called affordable safe light plane design field as he was the designer of Ford's 1925 Flivver Plane and designed the pre-World War II two-control, spin proof General Skyfarer airplane. The professors tried several sources for financial support in government, academia, and industry for the experimental project but eventually they put up their own money. They arranged for Greater Boston Metropolitan Airport fixed base operator, E.W. Wiggins Airways and volunteers to convert a Piper PA-17 Vagabond to the two-place Helio No.1, and, in the end, the investment of the professors was about $6,000. The only unmodified part of the Vagabond was the fuselage cabin area. The original 65 hp Continental engine was replaced with a fuel-injected 85 hp Continental fitted with a multi-belt reduction unit that drove a specially designed nine-foot Koppers Aeromatic propeller. This extra large diameter propeller with its large thrust component was a major contributor to the success of the Helio-1. The propeller's wide slipstream coverage of the wing slats and slotted flaps provided a substantial added lift component during the take-off, landing and the slow/near hover flight regimes. The large propeller size dictated a higher-than-normal main landing gear with long throw shock struts to achieve sufficient propeller ground clearance. The main gear was also equipped with the newly developed Goodyear Crosswind castoring wheel assemblies. The fuselage was lengthened by nearly four feet and the Vagabond's already short 29-foot 3-inch wing was shortened by another nine inches. The wing had a complete array of the high lift devices available at that time, including leading edges with retractable full span Handley Page automatic slats and trailing edges with the equivalent of full-span slotted flaps. The ailerons could be drooped in the slow speed configuration to act as flaps and still perform for banking purposes. In addition to these devices, a later development called a lateral roll control augmentor was installed at the wing leading slat gaps. This device was aerodynamically positioned at the slat gap so that it provided excellent slow speed roll stabilization. When combined, these wing control devices had the effect of nearly doubling the total lift and decreasing the stall speed by nearly 30%. Most of these devices had been individually demonstrated previously but Professor Koppen was the first in the United States to successfully take advantage of the synergism of their combined capabilities. The tail surfaces also had to be redesigned to achieve the control effectiveness needed at the 30-knot slow flight speeds projected for the airplane. The successful first flight was on April 8, 1949. While the Helio-1 had a top speed slightly faster than the Vagabond, its slow speed capability of 30 mph was far superior to any fixed wing aircraft available at that time. The takeoff, landing and slow speed performance was spectacular. Its takeoff roll was less than 100 feet and the distance to clear a 50 foot obstacle was less that 300 feet. This compares with the Vagabond, which takes over 1,500 feet to clear a 50-foot obstacle. The Helio Aircraft Corporation had initially planned to market the two-place version but the market saturation of lightplanes caused the company to redirect its efforts. The aircraft in every garage remained a dream and so the four-place Courier, with more utility and payload, was developed for both the civilian and military markets. The Helio Aircraft Corporation donated the Helio-1, with a total flight time of about 100 hours, to the Smithsonian Museum in 1963. It was stored until the mid-1970s when it was loaned the Experimental Aircraft Association for display at its museum in Hales Corners, Wisconsin. It was returned to NASM in January 1981 where it is suspended for display at the Paul Garber Facility in Suitland, Maryland.