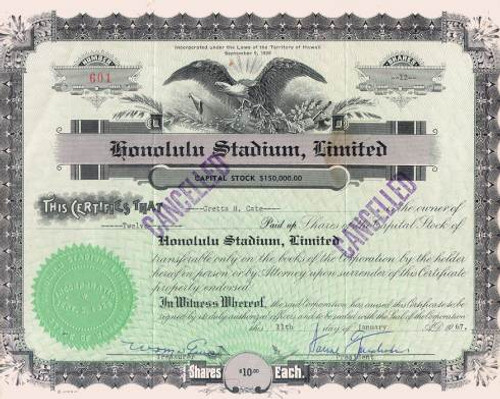 Beautiful certificate from the Honolulu Stadium, Limited issued no later than 1967. This historic document has an ornate border around it with a vignette of an eagle with its wings spread holding a shield and spears in its claws. This item is hand signed by the company's president and treasurer and is over 39 years old. BABE Ruth played there, Jessie Owens ran there, Elvis sang there. There were polo games, barefoot football games, minor league baseball games. And rodeos, spiritual crusades, hula festivals. Honolulu Stadium wasn't just an arena, a place where events took place. Ask those who played there, coached there, worked there, gathered there during its nearly 50 years of existence. They speak of the former wooden structure at the corners of King and Isenberg in reverential tones, referring to it as an old friend, some even, as a family member. "It creaked, actually creaked, like it was alive; (it was) kinda spooky," says Larry Price, KSSK radio personality, who worked the stadium as a player and coach. "It was a place for Hawaii to play," says producer-director Scott Culbertson, who has just completed the one-hour "Honolulu Stadium: Where Hawaii Play-ed" for Hawaii Public Television's "Spectrum" program airing Wednesday and Dec. 1. Culbertson combined vintage still photographs from the stadium's heyday with current footage and narrative from locals, like Price, who knew the stadium well. Honolulu Stadium was built in 1926 when Oahu's population was less than 200,000. Wallace Farrington was mayor, some Japanese women walked the streets in kimonos and Oahu's tallest structure was Aloha Tower. Later the stadium would be dubbed the "Termite Palace" for its pest-infestation, but while it shined, the stadium was home to high school football games, winter league baseball, polo matches, stock car racing. It also saw its share of legendary performers: Irving Berlin in 1945, Presley in 1957, and Billy Graham in 1958. The park was demolished in 1976 after Aloha Stadium was completed. On the two-acre site today is Stadium Park.