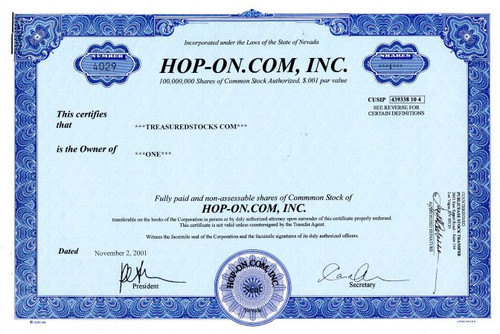 Beautiful certificate from Hop-On.Com, Inc. issued in 2001. This historic document was printed by GOES and has an ornate border around it. This item has the printed signatures of the Company's President, and Secretary, and is over 10 years old. Reported in 2005: Pink Sheets: HPON) develops and markets wireless phones and accessories as well as wireless surveillance systems. Its product line includes the next generation CDMA (Code Division Multiple Access) A method for transmitting simultaneous signals over a shared portion of the spectrum. The foremost application of CDMA is the digital cellular phone technology from QUALCOMM that operates in the 800 MHz band and 1.9 GHz PCS band. 2000 handsets designed by its Dallas R&D team as well as GSM/GPRS handsets. HOP-ON targets its phones to both emerging market carriers and other domestic carriers and resellers needing an entry level priced phone. In addition, HOP-ON offers a line of innovative and attractively priced wireless accessories for both HOP-ON phones and other leading manufacturers as well as affordable, wireless surveillance systems. HOP-ON is also known for developing the world's first disposable cell phone. It was an IS-95 CDMA phone that was sold to consumers with prepaid airtime and included the capability to add on additional minutes. History from OldCompany.com (old stock certificate research service) and WWI Liberty Bonds Buyer.