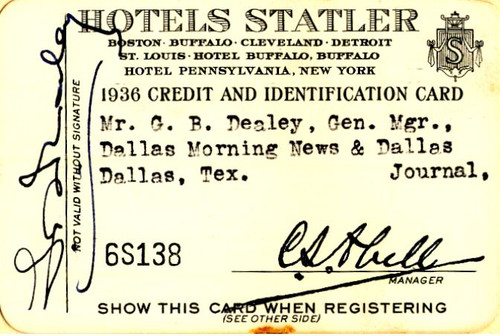 Credit and Identification card issued to George Dealey signed by him as well as the hotel manager in 1936 in Dallas, Texas. It is over 77 years old. George Bannerman Dealey (18591946) was a Dallas, Texas, businessman. Dealey was the long-time publisher of The Dallas Morning News. He used his influence to accomplish many goals but will always be remembered primarily for one of them. He crusaded for the redevelopment of a particularly blighted area near downtown Dallas. When the redevelopment, involving a large square located at the intersection of three major avenues, was completed, it was named Dealey Plaza in his honor. This site became known worldwide when, on November 22, 1963, President John F. Kennedy was assassinated while his motorcade drove through Dealey Plaza. Dealey was born on September 18, 1859 at the home of his parents, George Dealey (18291894) and Mary Ann Nellins (18291913), on Queen St., Rusholme, Manchester, England. He was the fifth of ten children. In the mid-1860s the family moved to Liverpool, England, where he began his schooling and worked as a grocer's apprentice. In 1870 his family immigrated to Galveston, Texas, where he continued in public school and worked at various odd jobs. On October 12, 1874 he assumed an older brother's job as office boy at The Galveston News at $3.00 per week, for the owner Colonel A. H. Belo. He worked for this publishing concern, which he later bought the rest of his life. Dealey took evening classes at the Island City Business College and rose steadily at the News. He became a traveling correspondent who sent news stories and business and circulation reports back to Galveston. In 1884 the News sent him to North Texas to determine a suitable location for a sister publication; he concluded that Dallas was the best choice, and on October 1, 1885 The Dallas Morning News issued its first edition. By 1895 he became manager of the paper. He became a board member of both newspapers in 1902, vice president and general manager of the corporation in 1906, and president in 1919, upon the death of Cesar M. Lombardi. In 1926 Dealey bought the Dallas Morning News, the Journal (an evening edition), the Semi-Weekly Farm News, and the Texas Almanac from the heirs of Alfred H. Belo and acquired the majority of the company stock. He was its publisher, still working each day, when he died of a massive coronary occlusion at his home at 3704 Alice Circle in Dallas in the early afternoon of February 26, 1946 at the age of 86. He was buried in Grove Hill Cemetery in Dallas. Dealey was a principled journalist. The News was perpetually enlisted in the cause of civic planning. A Dealey campaign of 1899 led to the foundation of the Cleaner Dallas League, which became the Dallas Civic Improvement League in 1902. Dealey's efforts were instrumental in the adoption of the original plan to improve Dallas by city planner George E. Kessler in 1910. Dealey refused advertising that he considered dishonest or immoral, including ads for hard liquor and even for oilfield promotions, since he could not determine sound from unsound petroleum ventures. The News also crusaded against the Ku Klux Klan's influence in the 1920s. Dealey's other business interests included the G. B. Dealey Land Company and the West Commerce Realty Company. He pioneered in newspaper-owned radio stations by opening WFAA in 1922. He helped establish Southern Methodist University and was instrumental in obtaining the Federal Reserve Bank of Dallas for the city. Dealey's personal involvement in civic activities included serving on the board of governors of the American City Planning Institute (192021), as vice president of the National Municipal League (192324), on the advisory council of the American Planning and Civic Association, and on the national committee of the Commission on Interracial Cooperation. He was a director of the Children's Hospital of Texas and was president of the Family Bureau, a pioneer Dallas social agency, from its inception in 1908. He was also president of the Philosophical Society of Texas, a member of the Texas Press Association, an honorary life member of the Texas State Historical Association, founder (1922) and lifetime president (from 1933) of the Dallas Historical Society, second vice president of the Associated Press (192324), an honorary national president of Sigma Delta Chi (194041), and an honorary member of Phi Beta Kappa (1943). He received honorary doctoral degrees from Southern Methodist University (1921), Austin College (1924), and the University of Missouri (1925), the last of which invited him to accept a gift to its school of journalism from the British Empire Press Union. He married Olivia Allen at her home in Lexington, Missouri on April 9, 1884. She was born in Lexington on November 14, 1863 and died at her home in Dallas on January 28, 1960. She had succeeded her husband as chairman of the board of A. H. Belo Corporation and was serving in that capacity when she died. Dealey was a Thirty-third-degree Scottish Rite Mason, Knight Templar, Shriner, and member of the Red Cross of Constantine. He was a Presbyterian and Democrat. Dealey Plaza, as noted above in Downtown Dallas was named for him, after his death. The New York Times called him the dean of American publishers. He died at his home in Dallas on February 26, 1946, of a coronary occlusion. The Dealeys had two sons: Walter Allen, E.M. (Ted), and three daughters. E.M. (Ted) Dealey (18921969), succeeded his father as publisher of the Morning News. A younger brother, James Q. Dealey (18611937), was a professor of political science at Brown University and, after retiring from Brown, editor of the Morning News. A nephew, Samuel David Dealey (19061944), was a World War II naval hero, who received the Medal of Honor and for whom a destroyer escort was named. James M. Moroney III, the current publisher of the Morning News, is Dealey's great-grandson. Another great-grandson, Dr. Walter Allen (Al) Dealey, left the family business to go into the ministry and studied under the legendary and internationally known Dr. Norman Vincent Peale of New York City. History from Wikipedia and OldCompany.com (old stock certificate research service)