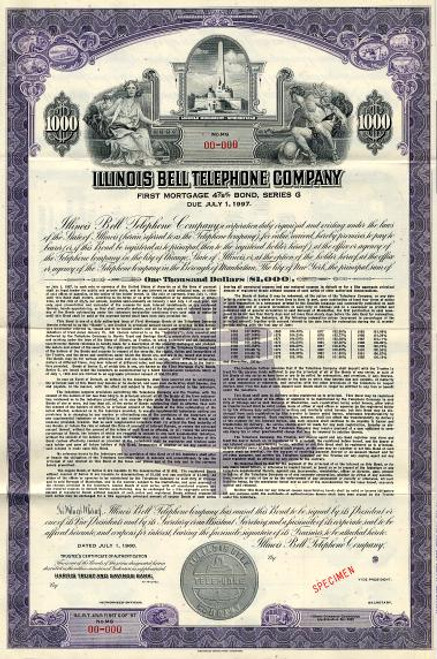 Beautiful engraved specimen certificate from the Illinois Bell Telephone Company dated in 1960. This historic document was printed by American Bank Note Company and has an ornate border around it with a vignette of an allegorical man and woman between the Lincoln Monument in Springfield. This item is over 46 years old. 74 coupons attached on right side. 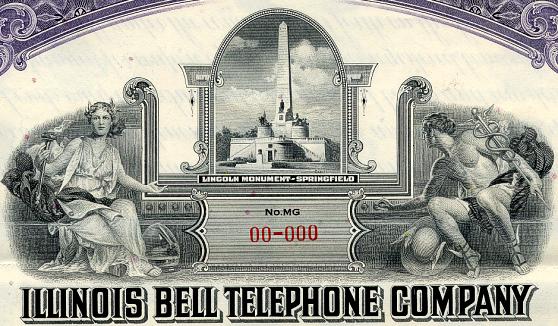 Certificate Vignette
Illinois Bell is the name of the Bell Operating Company serving Illinois. It is wholly owned by AT&T. Their headquarters are at 225 West Randolph St., Chicago, IL. After the 1984 Bell System Divestiture, Illinois Bell became a part of Ameritech, one of the 7 original Regional Bell Operating Companies. The Illinois Bell name continued to be used until January 1993, when Ameritech dropped all of their individual Bell Operating Company names in favor of using their corporate name, Ameritech, for marketing purposes. In 2002, SBC dropped the Ameritech name in favor of "SBC" as a national brand. On January 1, 2003, Illinois Bell, for regulatory business, was renamed Illinois Bell Telephone Company d/b/a SBC Illinois. Illinois Bell's legal name was changed once again in 2006, following conclusion of SBC Communications' purchase of AT&T, to Illinois Bell Telephone Company d/b/a AT&T Illinois. Illinois Bell, in 1971, became the first ever telephone company to offer Call waiting, Three-Way Calling, Speed Calling, and Call forwarding, all popular telephone service options to this day. About Specimens Specimen Certificates are actual certificates that have never been issued. They were usually kept by the printers in their permanent archives as their only example of a particular certificate. Sometimes you will see a hand stamp on the certificate that says "Do not remove from file". Specimens were also used to show prospective clients different types of certificate designs that were available. Specimen certificates are usually much scarcer than issued certificates. In fact, many times they are the only way to get a certificate for a particular company because the issued certificates were redeemed and destroyed. In a few instances, Specimen certificates we made for a company but were never used because a different design was chosen by the company. These certificates are normally stamped "Specimen" or they have small holes spelling the word specimen. Most of the time they don't have a serial number, or they have a serial number of 00000. This is an exciting sector of the hobby that grown in popularity over the past several years.

Cherokee Construction Company of the State of Illinois - Illinois 1887