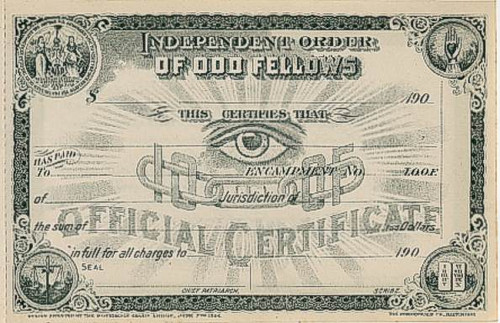 Beautifully engraved unissued certificate from the Independent Order of ODD Fellows dated 190_. This historic document was printed by Friedenwald Co. and has an ornate border around it with a vignette of the state seal and an underprint of the logo "Three Link Fraternity". 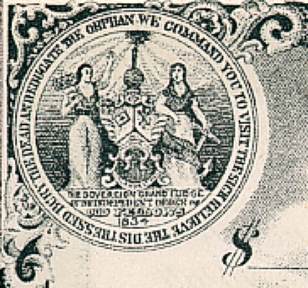 Certificate Vignette
In 17th century England, it was odd to find people organized for the purpose of giving aid to those in need and of pursuing projects for the benefit of all mankind. Those who belonged to such an organization were called "Odd Fellows". Odd Fellows are also known as "The Three Link Fraternity" which stands for Friendship, Love and Truth. The Independent Order of Odd Fellows was founded on the North American Continent in Baltimore, Maryland, on April 26, 1819 when Thomas Wildey and four members of the Order from England instituted Washington Lodge No. 1. This lodge received its charter from Manchester Unity of Odd Fellows in England. Odd Fellowship became the 1st national fraternity to include both men and women when it adopted the beautiful Rebekah Degree on September 20, 1851. This degree is based on the teachings found in the Holy Bible, and was written by the Honorable Schuyler Colfax who was Vice President of the United States during the period 1868-1873. Odd Fellows and Rebekahs were also the first fraternal organization to establish homes for our senior members and for orphaned children. The Odd Fellows Hall in Malden, Massachusettes was built in 1907. It is an example of 20th century formal eclectic design combining Renaissance and Classical Revival elements. It has been restored into a professional office building. The building is a registered Historical landmark as described below: Odd Fellows Building (added 1988 - Building - #87002564) also known as Odd Fellows Temple 442 Main St., Malden Historic Significance: Architecture/Engineering Architect, builder, or engineer: Newhall,Louis C. Architectural Style: Late 19th And 20th Century Revivals, Other Area of Significance: Architecture Period of Significance: 1900-1924 Owner: Private Historic Function: Commerce/Trade, Social Historic Sub-function: Meeting Hall, Specialty Store