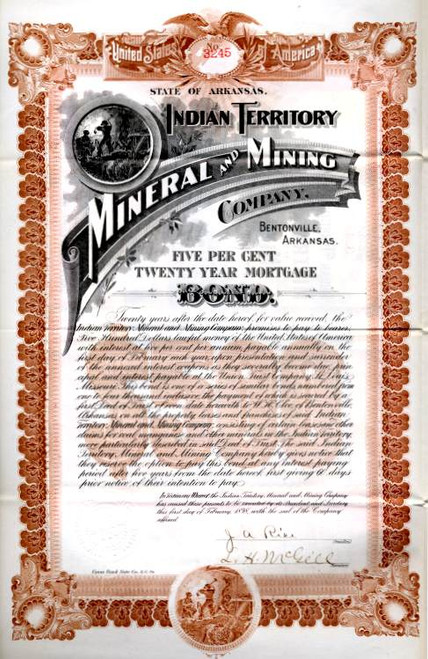 Beautifully engraved Certificate from the Indian Territory Mineral and Mining Company issued in 1898. This historic document was printed by the Union Bank Note Company and has an ornate border around it with a vignette of a mining scene. This item is hand signed by the company's President, James A. Rice and Treasurer, L. H. McGill is over 120 years old. This document is in excellent condition and has 20 unused coupons attached on the right side (not shown in the scan). Certificate was folded in fourths for storage and is in EF+ condition. 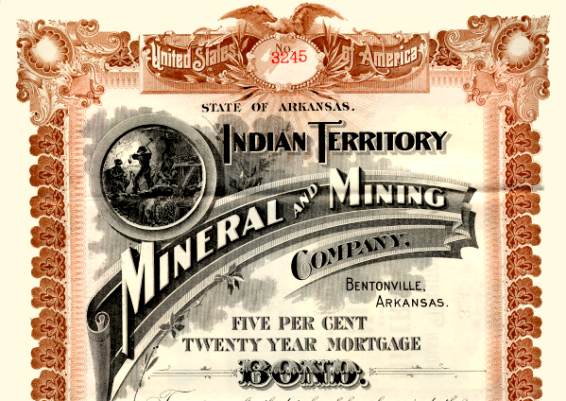 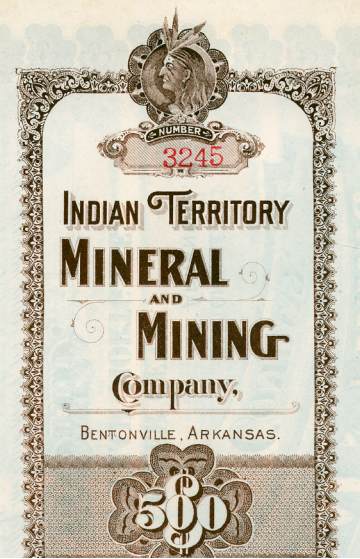 Certificate Vignette on back
The Indian Territory was name given to the region of the United States west of the Mississippi River that the federal government set aside in the 19th century for occupation by relocated, so-called civilized Native American tribes. The region, part of the Louisiana Purchase, was ceded in 1834 to five southeastern tribes and later to other tribes. The territory was greatly diminished by the American Civil War, white settlement, and federal nontribal subdivision. By 1907 the last of the Indian Territory had been incorporated into the Oklahoma Territory. Reported in the United States Investor and Promoter - 1898 What is there to the Indian Territory Mineral & Mining Co., both as to stocks and bonds? Is there any cash value to either? Capital stock said to be $5,000,000; first mortgage 5 per cent bonds amount outstanding. $2,000,000. Is the amount correct, and if so. determine accurately as to the value of bonds. Main office, Bentonville, Ark. Ans.: This company Is Incorporated under the laws of the state of Arkansas. The president is James A. Rice; secretary, L. H. McGlll; treasurer, C. M. Rice, and one Chaddlck, of Kansas City, Mo., is the moving force behind the scheme. The Rices and McGill are attorneys at Bentonville, but are said to have no capital; as to Mr. Chaddlck, we understand he Is a man of some means. We fail to see how there can be any cash value, either to stock or bonds of this organization. The amount of stock and bonds, as mentioned in the inquiry, is correct. We have no means of determining the value of the bonds; in fact, we fail to see how any value could be attached to the bonds now. The mineral lands are all In the Indian Territory, undeveloped as yet, and the whole thing is thought to be a scheme belonging to Its proper class, and is considered lightly at Bentonville, Ark., the headquarters of the company. The scheme is not regarded with favor there. Bentonville, Arkansas Bentonville is the ninth-largest city in Arkansas, United States and the county seat of Benton County. The city is centrally located in the county with Rogers adjacent to the east. The city is the birthplace and world headquarters of Walmart, the world's largest retailer. It is one of the four main cities in the four-county Northwest Arkansas Metropolitan Statistical Area, which is ranked 109th in terms of population in the United States with 463,204 residents in 2010, according to the United States Census Bureau. The city itself had a population of 35,301 at the 2010 Census, with an estimated population of 49,298 in 2017.