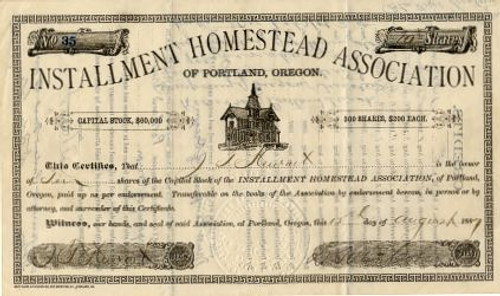 Beautiful certificate from the Installment Homestead Association issued in 1887. This historic document was printed by West Shore Litho Company and has an ornate border around it with a vignette of an old house. This item has the signatures of the Company's President, David Solis Cohen and Secretary, J. T. Stewart and is over 121 years old. David Solis Cohen also signed the back of the certificate. This is only the second time we have had this company's certificate for sale. 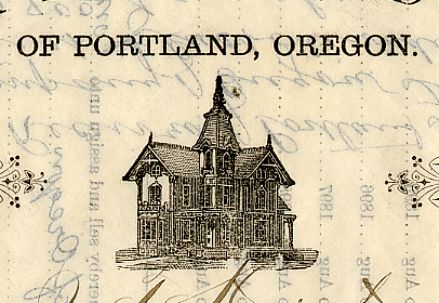 Certificate Vignette
The following data is from the History of the Pacific Northwest, Oregon and Washington, 1889. D. Solis Cohen - Prominent among the younger of the business men who have materially advanced the mercantile interest of Oregon is he whose name appears above, who was born in Philadelphia, where he resided consecutively until leaving for Oregon about twelve years ago, and where his family still remain as among the oldest residents, having resided in that city from early times. Previous to leaving his native city, Mr. Cohen had given up mercantile business for the pen, and was connected with various local papers, writing under a nom de plume which is still popularly remembered in the Quaker City. Being taken with the Western fever, however, he came to Portland, where, after being engaged a time as book-keeper with the Davis Bros. of San Francisco the firm of Cohen, Davis & Co., which from a comparatively small beginning now virtually controls its line of business in the Northwest. The firm imports largely from Europe direct to Portland, and has business connections throughout the entire surrounding country into Idaho and Montana. Mr. Cohen has always taken an active interest in public affairs, especially those of a philanthropic character. He is one the managers of the Boys' and Girls' aid Society, also of the Free Kindergarten Association. He is serving a second term on the State Board of Immigration, and has since their organization been vice-president of the Franklin Building Association, and president of the Installment Homestead Association, - institutions which have been important factors in the development of the city. Mr. Cohen is popular in Masonic and A.G.U.W. circles, and being a ready and eloquent speaker is frequently called upon for addresses of a public and social character. Republican League Register of Oregon, The Register Publishing Company, 1896, page 192. COHEN, D. SOLIS, of Portland, was born in Philadelphia in 1854. He early became a writer if prominence, being connected with the Public Ledger and Sunday Dispatch of that city, a regular contributor to prominent journals and magazines, joint author of humorous work that had ten editions and the writer of two plays produced by Roland Reed. In the fall of 1876 he came to Portland and established the well-known Golden Rule Bazaar. He has taken a prominent part in many things for the welfare of the city and state. He was for four years a member of the State Board of Immigration and also a member of the State Board of Charities and Corrections. He is in fraternal circles. Politically he has always been a Republican of the higher order. He took a prominent part in the campaign leading to consolidation of the cities, and was elected Police Commissioner in 1892. Mr. Cohen is now the nominee of one wing of the Republican party for Mayor. He is fluent and classic speaker and writer. Portland was unusual in the broad and vital support Zionism received from the Jewish community. Stephen Wise and David Solis-Cohen created the founding principles of Portland's Zionist movement. Theodore Herzl himself came to the Beth Israel pulpit in Portland to speak. Zionism appealed to both the frontier heritage and pioneer spirit of Oregonians. J. T. Stewart was the last mayor of East Portland as the city voted on 1 June 1891 to merge with Portland.

Board of Trade of Portland, Oregon -1908